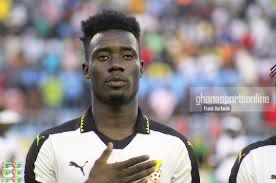 Former Hearts of Oak playmaker Winful has Cobbinah has debunked media reports that he has been dragged to court in Albania over forged documents.
In a statement the player has labeled the story by Ghanaian portal Ghanasoccernet.com is an abject lie.

Below is the full statement from Winful Cobbinah;

My attention has been drawn to an online publication by Ghanasoccernet.com, stating that i have been dragged to court over Document forgery.

I want to state emphatically that there is no truth to the publication made by Ghanasoccernet.

I have no court issue in Albania and my acquisition of my Albanian passport was done through the proper documentation process.
The picture used for the story was taken at the passport office were I was going through the finger print process to obtain my passport.

I there entreat Ghanasoccernet to pull down the story and do proper fact checking before publishing any story of that sort.

Once again the story is false and need to be treated as such.