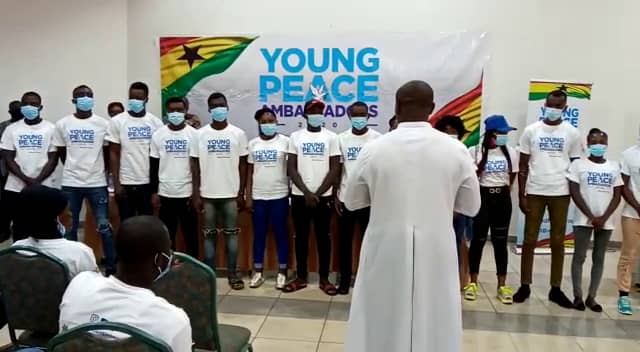 Some 60 young persons have been deployed to the Savannah, northern and upper East regions as peace ambassadors ahead of Decembers’ national elections.

The Young Peace Ambassadors trained by the Youth Empowerment Synergy are to pick up undercurrents of conflicts and find ways of diffusing tensions before during and after the voting period.

Executive Director of YES Emmanuel Edudzie indicates that the efforts are to compliment the wider peace infrastructure of the country.

He elucidated, “Towards the elections, the goal is to make these young people enter the communities, mobilize more youth to have that snowballing effect especially at a time the youth have become the main actors of violence in such periods. We are also registering them to become election observers.”

The West Africa Network for Peace Building which helped train this deployment warned that elements of vigilantism still exist within the political parties.

Its national coordinator Albert Yelyang fears the heightened dissatisfaction about the processes employed in the compilation and exhibition of the new voters register, could trigger conflicts on Election Day,

He told reporter Ivan Heathcote – Fumador, “If there are areas where a whole register is not seen and where electoral officials have to flee, that is something that we need to address.”

Some of the political parties now tend to have vigilante members as party agents and it means on Election Day we could have some people with capacity of vigilantes at the polling station,” he cautioned.

In the run-up to the 2016 general election when the Savannah and North East regions were then part of the Northern Region, there were 440 flashpoints

This has doubled to 884 out of the total of 1,943 polling stations in the Northern Region alone.

This will inform the terms of reference of the Youth Peace Ambassadors recruited by the Youth Empowerment Synergy to advocate peace, identify threats and monitor Decembers elections in these hot beds.

The young persons who are expected to recruit 100 youth each, will also serve as election observers and early warning agents in election flush points in the three regions.

The Youth Peace Ambassadors most of whom have seen tribal and electoral conflicts in their communities told Ultimate News, they are poised to offer their services to safeguard the peace of their home regions for posterity.

“Growing up in Tamale, I heard violence and gunshots during elections and we had to run away from school to the house. It was a very horrible experience and I don’t want my unborn children to experience it,” Rahama Isa shared.

Another youth peace ambassador, Mubarak Saibu told Ultimate News, “Going into these elections, the youth must lead the charge to safeguard our future and this prompted me to join as an ambassador for peace.”

The Young Peace Ambassadors were camped in Kumasi for five days for training before they were dispatched to their duty posts.