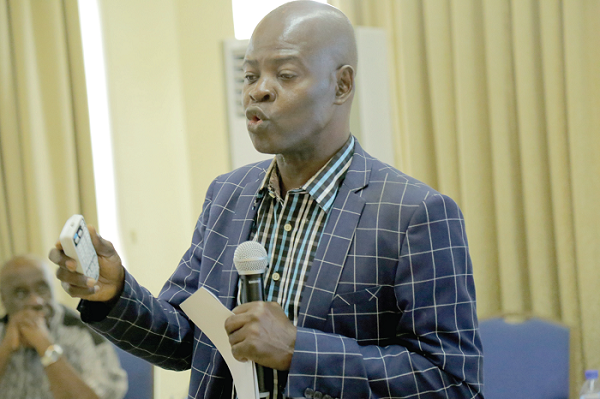 The Alliance of Civil Society groups working in the extractive, good governance and anti-corruption sectors, are challenging Special Prosecutor Martin Amidu to investigate and prosecute all persons involved in the controversial Agyapa Mineral Royalties agreement.

The demand follows a damning corruption risk assessment report from the OSP which alleged bid-rigging and other breaches in the royalties deal.

Addressing the media Wednesday, Spokesperson for the Alliance Dr. Stephen Manteaw argued the directive by the president for the arrangement to be sent back to Parliament is inadequate.

“While we commend the President for acting on the report, we hold the view that the specific cause of action directed by the President is inadequate and not sustainable. A proper reading of the report of the OSP should lead to two conclusions: (1) that the deal is defective beyond repair (2) that, there are potential breaches of various laws – Public Procurement Act and the Public Financial Management Act. Furthermore, the range of steps that the President has asked the Minister of Finance to take to repair the defects in the Agyapa transaction, objectively amount to there being deep-seated fundamental flaws.

“We also note that the Finance Minister, in his 30th October response to the OSP’sreport, disputed some of the report’s findings, claiming for instance that, the Ministry “has been transparent from the onset” and has “acted at all times, in good faith throughout the transaction.” This response, in our view, is at variance with the facts, as we have come to know them through our interaction with the Ministry of Finance on the matter. Following from these conclusions, we call for (1) the entire set of Agyapa Transactions to be rolled back and the transaction agreements abrogated. Parliament cannot repair the defects (2) that, steps be taken to investigate and prosecute breaches of any law. In this regard, we challenge the OSP to take the next logical step to investigate and prosecute any evidence of corrupt acts, in accordance with his prosecutorial mandate. The abrogation of the Agyapa transaction should lay the grounds for a more open and consultative process for options and solutions to getting the best value for our mineral resources,” the CSOs said in a statement.

Executive Director for ACEP Ben Boakye demanded a thorough stakeholders engagement regarding options available to government regarding maximizing the country’s mineral resources once the Agya deal is terminated. Mr. Boakye further called for amendments of the Minerals Royalties Investment Act to be amended to avoid a repeat of Agya

Touching on the decision by the OSP to include the Airbus scandal in the Agyapa report, Dr. Manteaw described the development as unfortunate. According to him, such a move had a potential of diverting attention from the Agya discussion.