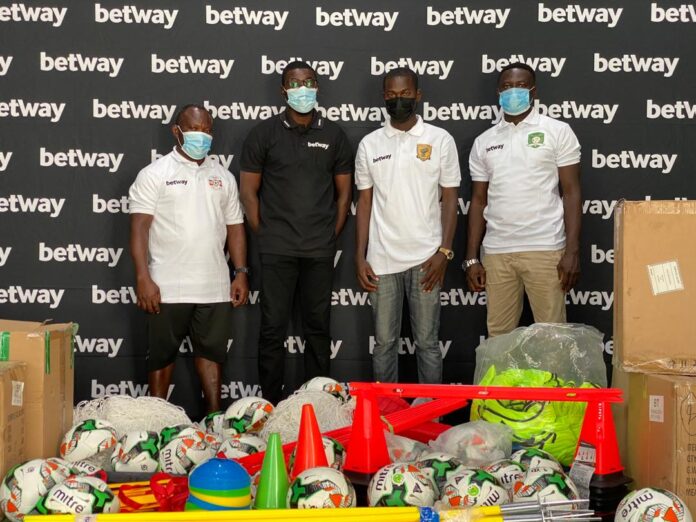 As part of Betway’s efforts to reaffirm support for its sponsored clubs, Betway has made donations to three Ghana Premier League Clubs it sponsors.

The donation which was made to the representatives of the three premier league clubs included soccer balls, agility ladders, training bibs and other sports equipment to assist the clubs as they prepare for the new Ghana Premier League season.

Magnus Rex Danquah Jnr, Country Manager – Operations speaking to the media during the presentation of items to the clubs at the Betway Concept Store in Adabraka, mentioned the brand has always supported the development of sports in the country with their sports development and CSR initiatives. In the past, they have made donations to the Amputee League Teams, Ghana Taekwondo Federation and Golden Ahafo Deaf FC. Through the Betway Talent Search and Betway 12th Man Projects, the brand has supported upcoming footballers and former Ghanaian players.

“The donation comes at a time when sponsored clubs are preparing for the season after the long break. We expect the items to help upskill the players as they get ready for the season. We trust their output in the season will uplift the communities they call home and the GPL in totality”.
Commenting on Betway’s unwavering support, Chief Executive Officer of Liberty Professionals F.C thanked Betway for continuously supporting the clubs they sponsor. She was hopeful that the equipment received will go a long way in supporting the teams as they work towards the new season.
The new season of the Ghana Premier League kicks off on 14 November, 2020 as Dormaa based Aduana Stars take on twenty-time winners Accra Hearts of Oak at the Agyemang Badu I Stadium.