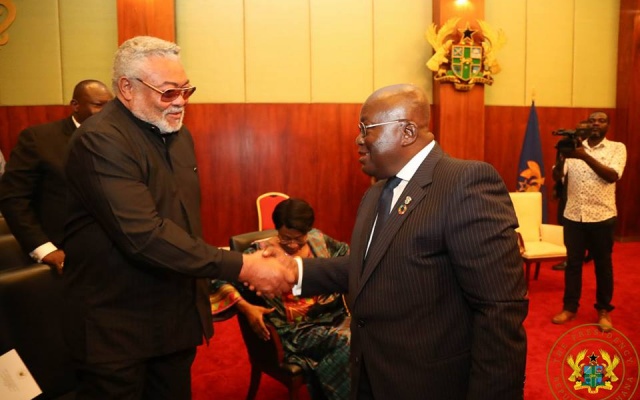 Usually it is strange to see a sympathiser crying at a funeral more than the bereaved. In any such event especially when the sympathiser is a known enemy of the deceased like the case of Akufo-Addo when the death of former President Rawlings is concerned, shocked on-lookers will describe the act as a rehearsed camouflage to hide the truth; shedding crocodile tears!

Since the passing a few days ago of the first President of the Fourth Republic, President Akufo-Addo and the New Patriotic Party (NPP), long-time haters of President Rawlings have sought to play to the gallery; managing public shows and manipulating news and events to convince all that they are now lovers of the dead icon and that they care so much. Of course, we all show respect to the dead but an enemy who suddenly portrays himself as a close family member needs dissection to see what he harbours.

Nana Akufo-Addo as Foreign Affairs Minister stripped the former President of all diplomatic courtesies and protocols when the NPP took power in 2000. In the words of Rawlings himself there were attempts to get Swiss Air to withdraw all diplomatic courtesies to him which the airline refused bluntly. He, again, as Attorney -General prosecuted Rawlings’ wife and put her through hell under a very strenuous litigation process all in a bid to usurp the Nsawam Cannery from her 31st December Women’s Movement.

The NPP claimed Jerry Rawlings was not Ghanaian and even took him to court for the court to determine whether he was Ghanaian or not. They humiliated him knowing very well that he had a Ghanaian mother and was thus Ghanaian as granted by the 1992 Constitution. Not satisfied with the outcome of the citizenship case the NPP sought to destroy systematically all legacies of the former President. They went to court (Re-NPP v Attorney-General) for a declaration that 31st December should not be celebrated as a public holiday. The court went ahead to declare same for the NPP.

Following the cancellation of 31st December from our list of public holidays, the NPP dominated parliament in 2001 further passed a law to repeal PNDCL 220 that recognised Rawlings’ 1979 coup anniversary, JUNE 4TH as a public holiday. One recalls the travails of this selfless man who brought into being economic recovery from the debilitating droughts of the 1980s and the current democratic dispensation we are in.

Some key members of the NPP have stated publicly that they joined the NPP to tighten the noose around Rawlings’ neck. In fact according to most of them the New Patriotic Party was formed for a purpose; they perceived that Jerry John Rawlings was ‘a wicked, corrupt dictator’ who must be removed from power. God did not help them though as they struggled unsuccessfully to depose him until he completed his constitutional two terms and handed over a peaceful country in 2001. Even before then, they engineered his Vice K.N Arkaah to undermine him to lose power in the 1996 elections. It is believed they had secretly agreed with him to become Vice Presidential candidate for them, the opposition party!

Today, the man they despised so much and wanted to see him fall has passed away and they are suddenly his best friends to the extent that they had even taken away the Book of Condolence from the NDC leadership who had wanted to sign it and wish the family well! President Nana Akufo-Addo has suddenly become a darling friend just because political profit is assured.