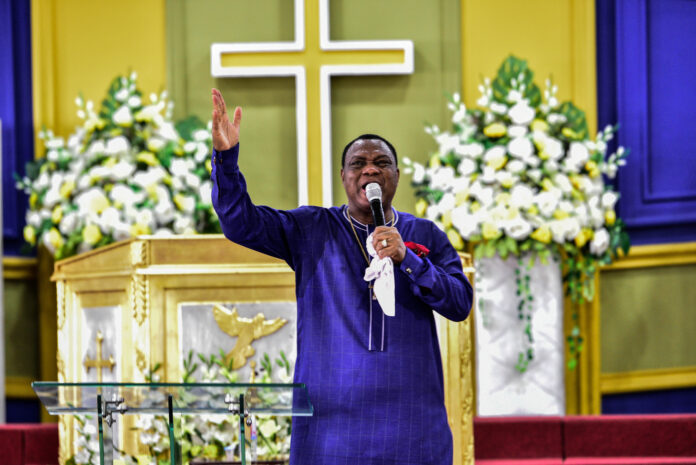 The Founder and Apostle General of Royalhouse Chapel International has charged the National Democratic Congress (NDC) to play their part in ensuring the country remains peaceful during and after the December elections.

“I want to place a demand on you as a Prophet to assure Ghanaians that this election will be peaceful and that the NDC will play the game according to the rules and that whatever the outcome and the results are, the NDC will accept the will of God and the will of the people,” he said.

The man of God gave the charge when the national executives of the NDC joined the church on Sunday the 8th of November to climax their three-day prayer and fasting for the coming elections.

Welcoming the delegation to the service, Rev. Korankye Ankrah said the NDC had over the years being visiting the church on occasions to seek the face of God. He said as always, the church granted the request of the NDC to come and present their thanksgiving to the Lord as they climaxed their three-day spiritual exercise, adding that the doors of the church are open to all who would want to come and seek the face of God.

By this action candidate John Mahama is presenting himself before God so that the counsel and the will of God will prevail.

National chairman of the NDC, Mr. Samuel Ofosu Ampofo, in his brief remarks said it has been the tradition of the NDC to always seek the face of God. He recalled that after a successful congress, they had done same, coming before God to render their thanksgiving.

“Indeed, the Lord has been faithful unto us throughout the Covid-19 period and the campaign and we give glory to God for what he has done. When the presence of the Lord is sought and the hand of God is raised, protection will be ours and victory will also be ours,” he said.

He added that the Presidential candidate, Mr. John Mahama, who was unable to be there physically directed the Party to undergo the fasting and prayer for favour before the Ghanaian people to give the NDC the mandate to execute the people’s manifesto.

“We are here and what we are doing is spiritual, we want to raise an altar and a covenant that the Lord will look unto and give us victory.

Vice presidential candidate, Prof. Jane Naana Opoku Agyeman, said it was time for the country to heal. She said violence occurs when people feel alienated, disrespected, marginalized and excluded, hence the NDC’s manifesto is a document of inclusion.

“Our land must heal, Ghana must heal, all the divisiveness and exclusion to the extent of families and friendships being threatened and torn apart, communities not coming together anymore and even within the church, must stop. This can only happen when you and I take a stand against exclusion and embrace everyone, after all Christ came for all of us,” she said.

She concluded by saying that when power is handed over to a party, it is an investment that they return by removing as many of the challenges of the people who gave them that power and that is the path of peace.” she said.