The ban takes immediate effect and therefore affects his ambition to contest for the CAF Presidency next year.

Ahmad was accused of the duty of loyalty, offering and accepting gifts or other benefits, abuse of position and misappriopration of funds

The head of Africa’s football has been under investigations at FIFA for some time now after accusations of financial malfeasance at Confederation of African Football.

His ban follows other high profile football officials who have been banned for various acts of misconduct and financial malfeasance namely, Sepp Blatter, Kwasi Nyantakyi, Michel Platini, Issa Hayatou amongst others. 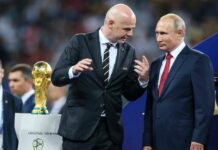