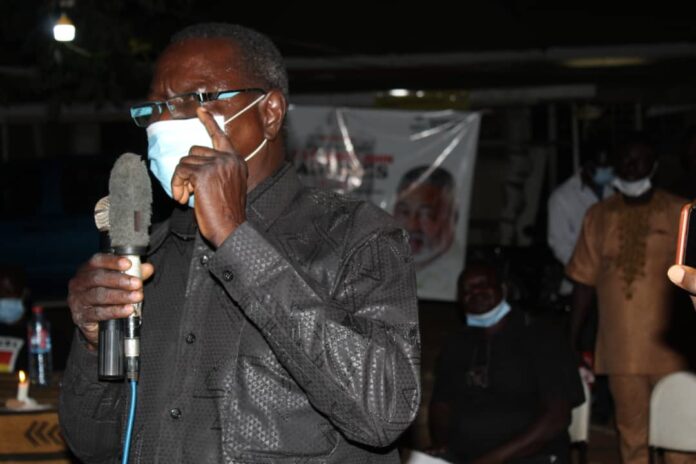 The opposition National Democratic Congress (NDC) has stated that its late founder and the country’s longest-serving president will not be laid to rest until the party he formed comes back to power.

The NDC’s Upper East Regional Secretary, Donatus Akamugri, made the statement Friday when supporters of the party held a vigil in Bolgatanga in honour of the deceased former president, Flt Lt. Jerry John Rawlings, a week after his sudden death in the nation’s capital, Accra.

“Rawlings must be buried when we are in power. He will be held if our political party does not come back to power to bury him. If he had wanted to be buried, then he should have been called to eternity before the period of elections. We had three weeks to elections when he died. So, his soul will not rest in peace if we have to bury him when an election is just around. And he was eager to cast his vote for his party. And once he has passed away and the election has not been done, we believe that he wants us to win election and bury him. Left with us, if we don’t win election, Rawlings is supposed to be kept until NDC comes back to power and, then, we will bury him.

“And surely, this election, we will win it because, with the spirit of Rawlings, with the way he has contributed to this country and the people seeing what he has done and even his opponents now calling him an angel, they would do him an honour for his party to come back to power and then bury him. So, we are calling on everybody in this country, including our party members and those who are giving tributes to Rawlings as a good person, to give him the best tribute by making sure that the NDC wins the election and, then, his party will be in power and bury him. That is when he will go to his Maker without any hindrance or hurt in him,” Akamugri said.

A veteran political figure, John Tia, hailed Rawlings on the night, describing him as a selfless man who lived all his life for the ordinary man.

“It was J.J. Rawlings who said that Ghana belonged to all the people in Ghana. That is how electricity came to the north. That is how he developed our roads. He sacrificed his life and developed this country. He believed in the common person. He believed in freedom,” remarked the former Ambassador to Cuba and Minister for Information.

Members of the United Cadres Front, an anti-corruption force Rawlings helped form decades ago, participated in the night watch.

The cadres also delivered a tribute on the night, recalling how a military revolt in 1979 saw Rawlings plucked from ‘the Guardroom of Death’ and projected into the ‘Castle of Power’.

“It was on the morning of 15th May, 1979, that the name Flt Lt. Jerry John Rawlings popped up in ecstasy and prominence. A highly charged group of junior officers of the Ghana Armed Forces made a revolt against the senior officers of the Ghana Armed Forces. Their aim: to restore the image of the Armed Forces that had fallen to very low ebb. The most profound statement made by Flt Lt. J.J. Rawlings was during their court martial where he declared as follows: ‘Leave my men alone. I am responsible for everything’.

“Facing imminent death by firing squad, another group of junior officers rescued him from guardroom and sent him to the Ghana Broadcasting House on June 4, 1979, to broadcast the overthrow of the military regime. Dubbed ‘house-cleaning exercise’, the revolt became popular, attracting ordinary citizens, students, market women, etcetera. Students left their classrooms and lectures to evacuate cocoa from the hinterlands. Discipline, integrity, hard work and justice delivery were the hallmarks of the era. Comrades, we can remember our founder J.J. Rawlings better if we adhere to his philosophy of probity, accountability, social justice and social democratic ideals of the National Democratic Congress,” said the cadres’ front in a tribute read by Comrade Francis Ayaaba.

The party is also scheduled to organise a “Probity and Accountability” street walk and a cleanup exercise in the region in honour of the departed “Champion of Democracy” on Saturday.