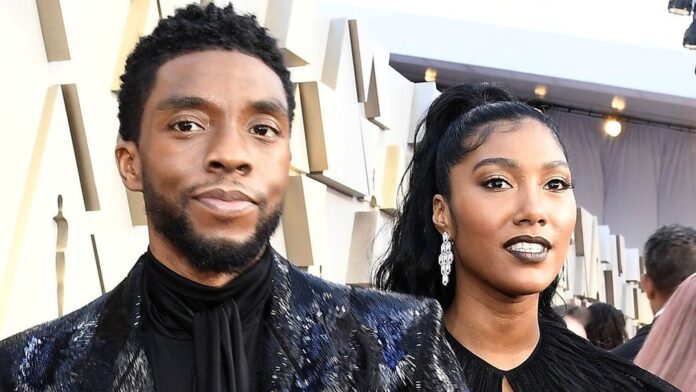 Chadwick Boseman has been remembered by his widow as an actor who “gave himself over fully to every moment”.

Accepting an award on the late star’s behalf at a virtual Gotham Film Awards, Simone Ledward Boseman said he had been “the most honest person I’ve ever met”.

“He didn’t just stop at speaking the truth,” she continued. “He actively searched for it in himself, in those around him and in the moment.”

The Black Panther star died of cancer in August last year at the age of 43.

He was honoured with the Gotham Awards actor tribute prize.

In a video message played during Monday’s awards presentation, Ledward Boseman fought back tears as she spoke about her “imperfect but determined” husband.

She said he had been “blessed to live many lives within his concentrated one” and implored him to “keep shining your light on us”.

Best known for his role in the Marvel superhero franchise, Boseman also played real-life figures such as James Brown (Get On Up) and Jackie Robinson (42).

He was also nominated posthumously for the Gothams’ best actor award for his work in Netflix drama Ma Rainey’s Black Bottom.

Riz Ahmed, who won the prize for his role as a drummer who goes deaf in Sound of Metal, also paid tribute to Boseman as he accepted his honour.

The British actor said his fellow nominee had been “truly inspiring” and had set “an example for all of us” with his “humanity and dignity”.

Viola Davis, Boseman’s co-star in Ma Rainey’s Black Bottom, received another of the evening’s honorary accolades for her work in the film.

Presented annually by the Independent Filmmaker Project, the Gotham Awards are one of the first events to be held during the yearly awards season.

The best feature award was presented to Nomadland, confirming the Frances McDormand drama as one of this year’s leading awards contenders.

The film, about a community of elderly idealists roaming the United States in dilapidated vans, was also presented with an audience award.

Yet two-time Oscar winner McDormand missed out on the best actress prize, which went instead to Miss Juneteenth star Nicole Beharie.

Other British winners included Kingsley Ben-Adir, who received the breakthrough actor prize for playing Malcolm X in One Night in Miami.

Britain’s Steve McQueen said he was “very grateful” to receive a special director’s prize for his Small Axe anthology of films.

There was also recognition for Michaela Coel’s I May Destroy You, which won one of two awards given for breakthrough TV series.

This year’s ceremony was held in New York without an audience, with all the winners accepting their accolades via video link.

Horror film Saint Maud has received the most nominations, picking up citations in eight categories including film of the year.

The 41st London Critics’ Circle Film Awards will be presented virtually on 7 February.