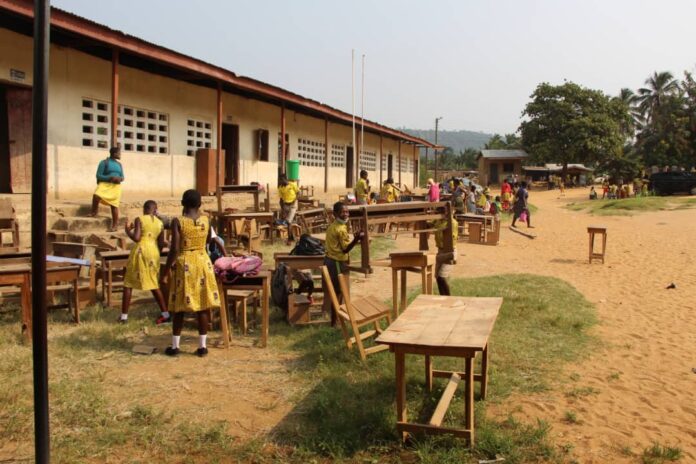 The acting Municipal Chief Executive for Suhum in the Eastern Region Margeret Darko on Wednesday January 20, 2021 lividly ordered for immediate opening of a three unit classroom block at Akote a community in the Municipality.

This was after Students of Akote M/A Junior High School were seen learning in the corridor of the newly constructed classroom block which was locked awaiting commissioning and handing over.

The classroom block constructed by Kakem Construction limited was completed in December 2020 which the contractor handed over the keys to the Municipal engineer who was keeping the keys while the students and teachers were struggling to have classroom for academic work.

This compelled the first batch of the Junior High School students supposed to occupy the facility to learn in the corridor.

The students carry their own benches and plastic chairs from home to school daily.

When Starr News Eastern Regional Correspondent Kojo Ansah contacted the headteacher she said the facility was yet to be handed over and opened for use.

The Municipal Chief Executive for Suhum Margaret Darko upon hearing the situation ordered that the facility be opened for the students to use.

She told Starr news that she was unaware of the situation and blamed the Municipal engineer for the mishaps.