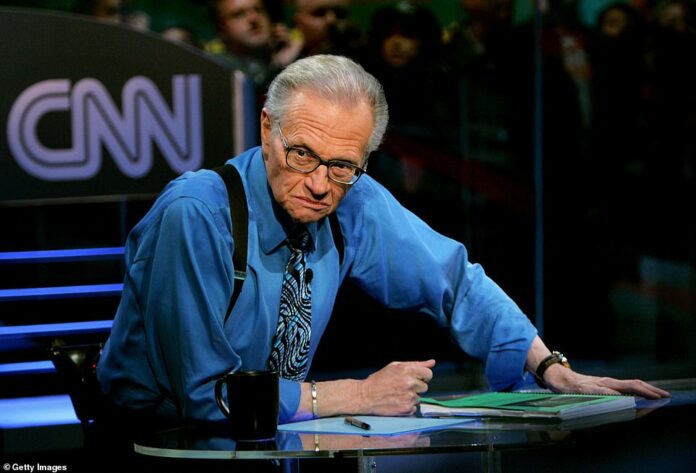 Larry King, the American broadcaster and cable news interviewer of celebrities and public figures, has died at the age of 87.

He had been hospitalized at Cedars-Sinai medical center in Los Angeles with symptoms of the coronavirus.

A statement on King’s social media accounts confirmed the news on Saturday.

With his trademark suspenders, gravelly Brooklyn accent and under-prepared questioning – he often said he preferred entering an interview knowing no more than his audience, so he could ask the questions they would – King became, over the course of six decades, one of America’s most recognizable media figures. At its height, his flagship CNN show, Larry King Live, which he hosted for 25 years, drew 1.5 million viewers a night.
Advertisement

The broadcaster, known for his soft interview style (“If you approach [an interview] combatively you get defensiveness and you don’t learn much,” he told the Guardian in 2015), conducted more than 30,000 interviews during his career, according to CNN, including sit-downs with such public figures as Yasser Arafat, Nelson Mandela and Vladimir Putin, every president from Richard Nixon to his friend Donald Trump, and celebrities from Frank Sinatra to Lady Gaga.

Born Lawrence Harvey Zeiger on 19 November, 1933 in Brooklyn to Orthodox Jewish immigrant parents – his father Aaron, a restaurant owner, was from Austria, and his mother Jennie, a garment worker, hailed from Lithuania – the Peabody-winning broadcaster grew up dreaming of a career in radio. He got his break as a morning DJ in Miami Beach, Florida, in 1957, and expanded to national broadcasting in 1978, as he cultivated a devoted audience with his meandering interviews and personal digressions.

The nascent cable news network CNN granted King a primetime show in 1985, which he hosted until he was contentiously replaced by the British TV personality Piers Morgan in 2010.

King continued to host specials for the network until 2012, when he left CNN to launch a production venture, Ora TV, with the Mexican billionaire Carlos Slim. King drew criticism in recent years for his work with RT (previously Russia Today), a Russian state broadcaster which picked up his political and talkshow programs in 2013.

King, who was married eight times to seven women (his final marriage, to Shawn Southwick, ended in divorce in 2019) had survived a major heart attack in 1987, lung cancer in 2017, an angioplasty and stroke in 2019, as well as the death of two of his five children – son Andy, 65, from a heart attack, and daughter Chaia, 51, from lung cancer – within five weeks in August 2020.

The Peabody-winning broadcaster told the Guardian in 2015 that he was most proud of being a father to his five children and his many awards, including a lifetime achievement Emmy. “Hopefully I’ve brought enjoyment and knowledge to people by being a conduit,” he said.

Chattels of collapsed 347 MFIs to be auctioned