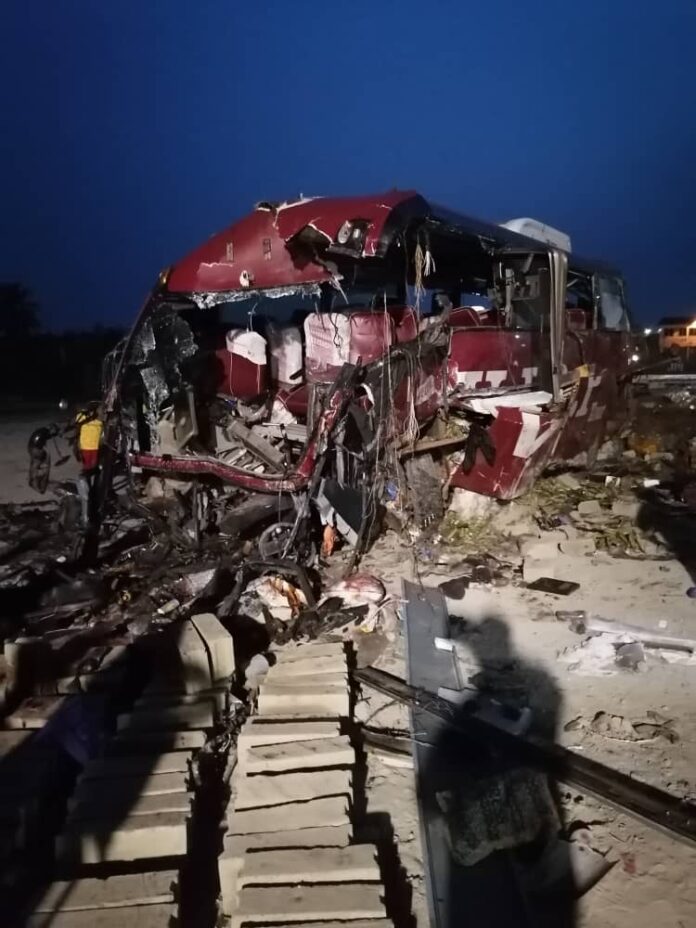 Three more victims of the fatal accident which occurred on the Akyem Asafo stretch of the Accra to Kumasi Highway have died increasing the death toll to nineteen (19).

The three died while receiving treatment at the hospital.

Meanwhile, family members of the victims have thronged the health facilities.

Starr News has gathered that a driver now deceased driving a Kia Granbird bus with registration number GT 5629-18 with passengers on board from Accra towards Kumasi direction made wrong overtaking on reaching Akyem Asafo junction stretch of the road and in the process crashed head-on with another Kia Granbird bus with registration number GE 5510-15.

Sixteen (16) passengers from both vehicles, comprising 13 males and 3 females died on the spot. The two drivers also died.

According to the acting Public Relations Officer of the Eastern Regional Police Command Sergeant Francis Gomado, the bodies were extricated and deposited at Suhum Government Hospital mortuary for preservation, identification, and an autopsy by a team of
Police, Ghana National Fire Service, and Abundance Services from Suhum, Bunso, Kibi, and Ayensuano personnel were there to assist the Police.

The Eastern Regional Commander of the Motor Transport and Traffic Department (MTTD) of the Ghana Police Service, Chief Superintendent Stephen Ahiatafu last week hinted at plans by the department to clamp down on unlicensed drivers operating in the region.

This follows the killing of 60 persons in 45 road crashes recorded between January 2021 and February 13th in the region.

“From January to 13th February we had 60 people killed in Eastern region, and Kibi Division is leading that on Nsawam to Suhum area. In all, we have 45 accidents that were fatal. With that 45 accidents, 60 people were killed. You will be startled to note that commercial vehicles killed 19, private vehicles killed 8, motorcycle/tricycle killed 20, and then the pedestrian knockdowns were 13,” Superintendent Stephen Ahiatafu said.

According to him, most of the pedestrian knockdowns “were caused by unlicensed drivers and we have to sound a warning to the pedestrians also that when they are walking on the road they must take their personal security in their own hands. It is far better to face a vehicle than the car coming from your back.

It is dangerous. So these pedestrian knockdowns can be avoided so let us see how we can protect our personal safety when we are walking on the streets because our roads are not pedestrian favorable so we have to take that protection”

Superintendent Ahiatafu indicated analysis by the MTTD shows that ” motorcycles and tricycles are killing more people than the vehicles and most of them didn’t have a license so we are going to embark on series of checks on them the public should not take it to us the police is harassing them. When we arrest you we will ensure that the law takes it course. I will like to emphasize that those who give vehicles to drivers without a license will also be charged”

He also told Starr News that Police will clampdown on unregistered vehicles.

Meanwhile, two drivers have been prosecuted and convicted by the court last week for careless driving.