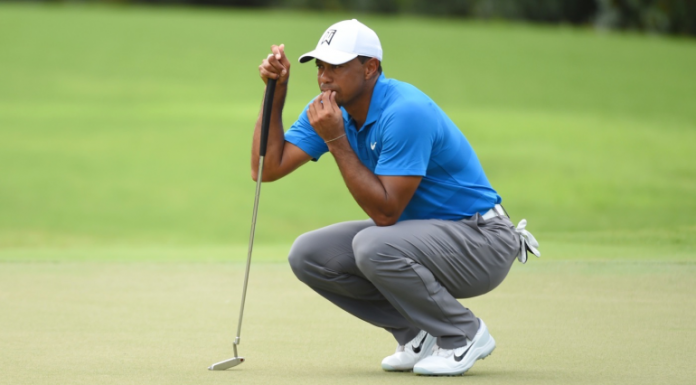 Tiger Woods “hopes” to play in the Masters at Augusta National in April after undergoing fifth back surgery.

The 45-year-old American had a microdiscectomy to relieve a pressurized disc fragment in January.

Woods recovered from spinal fusion surgery in 2017 to win a 15th major at the 2019 Masters, but his participation in this year’s event – which begins on 8 April – is in the balance.

“I have one more MRI scheduled so we’ll see then if I can start doing more activities.

“I’m still in the gym, still doing the mundane stuff that you have to do for rehab; the little things where I can start gravitating toward something more.”

Asked if he would be at Augusta National in seven weeks, Woods replied: “I hope so,” before adding the results of his MRI scan would determine whether he would be able to fit in a warm-up event.

Woods last played at the PNC Championship in December, where he felt “discomfort” in his back.

He won his fifth Masters’s title in 2019, more than a decade after his previous victory in a major.

He jointly holds the record for most PGA Tour wins at 82 with Sam Snead and is three behind Jack Nicklaus’ mark of 18 major titles.

But back injuries have badly hampered Woods in recent years and after playing just one PGA Tour event between August 2015 and December 2017 he had spinal fusion surgery.