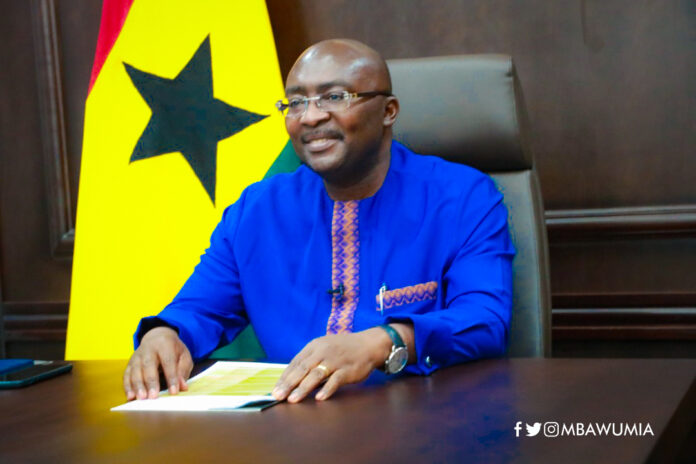 The Vice President, Dr Mahamudu Bawumia, has launched a $54.5 million Ghana Shea Landscape Emission Reduction Project that is aimed at restoring degraded shea parklands and improving existing stock of economic and multi-purpose trees in the Northern Savannah landscape of Ghana.

The 7-year project, part of the Parkland Restoration Fund set up by the Global Climate Fund, is to be implemented by the Forestry Commission with the support of private sector actors from the Global Shea Alliance and UNDP.

Performing the virtual launch as part of a keynote address at the 2021 International Shea Conference on Tuesday, April 27 Vice President Bawumia challenged the Forestry Commission to “see this project as a strategic investment to stop shea parkland destruction and empower communities and their ecosystems to build climate and economic resilience.”

Recalling the very important economic and cultural roles played by the shea tree in the lives of the people of Africa and the world, particularly in the Northern part of Ghana, Vice President Bawumia bemoaned the fact that Ghana’s shea exports currently enter the global supply chain at the bottom with low market value and therefore low income for the primary producers, and outlined ongoing efforts to turn this around.

“As part of efforts to transform Ghana’s Agricultural Sector to one where value is added to the raw produce and the value chain is mined to the maximum, there have been several initiatives targeted specifically at the Shea industry.

“I am happy to mention that one such important initiative was the launch of the Tree Crops Development Authority (TCDA) in September last year, which is backed by an Act of Parliament (Act 1010). We count on the support of the Global Shea Alliance to serve as a strategic partner to Ghana’s new Tree Crops Development Authority for deep stakeholder engagement that will increase knowledge sharing, research and development, and market access.”

Dr Bawumia also expressed worry about the cutting down of Shea trees, which could have an impact on global warming.

“I am informed by industry experts that Shea is a big sequester of carbon; saving the ecosystem in the environment where they grow.  “Despite this important role, it is sad to see trees cut down for various reasons such as charcoal for household fuel. Shea trees take at least 20 years to mature.

“Cutting down one tree means many years lost. I am charging the Global Shea Alliance to continue to engage stakeholders including Tree Crops Development Authority, local chiefs, landowners, the Ministry of Lands and Natural Resources, Forestry Commission, and other international agencies to take actionable steps to stop this menace.”

Vice President Bawumia commended the Global Shea Alliance for setting up the Parkland Restoration Fund as part of the Shea Parklands Initiative under the Global Climate Fund. The fund is aimed at mobilizing resources to grow 10 million trees and to protect 4 million hectares of shea parklands.

The Global Shea Alliance, a non-profit industry association, has members across more than 30 countries who contribute, since its establishment 10 years ago, to sustaining the shea industry.