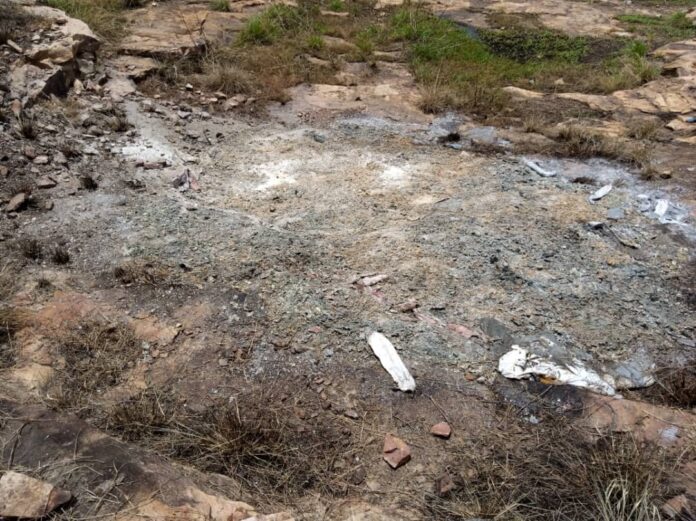 Three persons have been injured in explosive waste disposal incident at Asaman in the Okere District of the Eastern Region.

The victims were blasters who were disposing of the explosive items.

The incident which occurred on Sunday April 25, 2021 at about 11:55 am also affected dozens of buildings in Asaman and another community, Okwenya, which falls under the Yilo Krobo Municipality.

Starr News Eastern Regional Correspondent Kojo Ansah visited the communities and observed cracks in buildings and damage to the ceiling and other electronic appliances.

The explosive incident caused trauma among residents in the two communities. At Asaman, residents run from their rooms to converge on the roadside of the community for safety.

Church services were disrupted by the earth tremor caused by the explosion incident.

Two octagenarian couples narrated to Starr News that “we were in our room when all of a sudden we saw the building shaking after a deafening blast. So my wife even wanted to come but the tremor was so severe that she fell down. They have been blasting rocks here with minor tremor but yesterday’s one was horrifying. It was unprecedented”

Starr News gathers that the incident occurred at Asaman Quarry Explosive Magazine site which is about 2km close to the Asaman community.

A visit to the incident scene noted that the explosive wastes were being deflagrated in the open at the site when the incident occurred.

Vegetation around the scene was pulverized by the impact of the blast .

Further checks indicate that a Tarkwa based company Maxam Ghana limited sent the three blasters with explosives waste to dispose on the quarry site owned by one Bright Nuer.

According to the chairman for the quarry, Fiabor Kwabena, the burning of the explosive waste interfered with strong wind that carried some of the highly explosive magazines into the fire leading to the accidental blast.

Personnel of the National Disaster Management Organization (NADMO) were in the community for investigation and assesment .

A Deputy Eastern Regional Director of the National Disaster Management Organization, Eric Tetteh, told Starr News “preliminary investigation indicate that the Quarry company gave out the site to another company to dispose it’s expired explosive magazines which was not done according to established standard operative procedure hence the incident”.

According to him, the Organization was assessing the impact of the incident in the two communities.

Regulation (6) of the Minerals and Mining (Explosives Regulations,2012(L.I.2177 ) states that,
(1) A holder of a mineral right in relation to which explosives are used and a manager shall, in relation to the use of explosives under that manager’s control, appoint a person with a valid
explosives manager’s certificate as explosives manager.
(2) A manager shall ensure that activities that involve explosives, accessories or precursor substances are
(a) managed by a certified explosives manager;(b) carried out only by competent and certified persons; and
(c) carried out only if the licenses and permits required are in place.
(3) The appointment of competent persons does not relieve the holder of a mineral right or a manager, of any personal responsibilities under these Regulations.

Regulation 7 specifies that any person who contravenes any of these Regulations or an order made under these Regulations for which a sanction is not provided commits an offence and is liable on summary conviction to a fine of not less than fifty penalty units and not more than one hundred penalty units or a term of imprisonment of not less than three months and not more than six months.