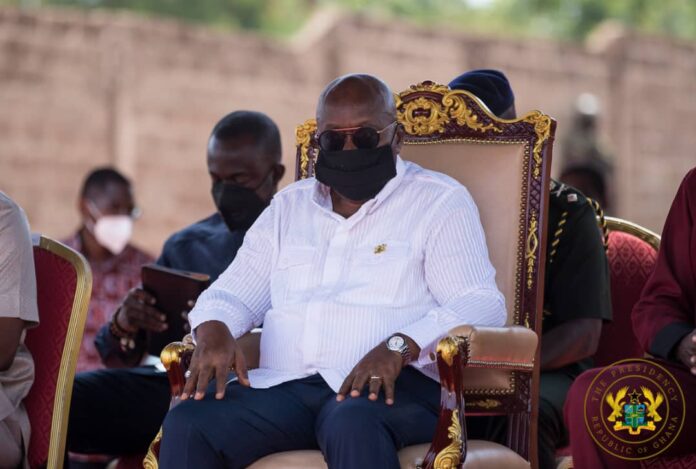 President Akufo-Addo has reiterated the commitment of his government to put investment in youth development at the forefront of its agenda, noting that it is the surest way for the developing world to catch up with the developed.

Speaking at the sod-cutting ceremony for the commencement of construction of the “Award House”, the proposed office complex of the “Head of State Award Scheme” (HoSA), at south Legon, Accra, President Akufo-Addo said his administration places great hope in the capacity of Ghanaian youth to shape the country’s future and “make Ghana truly the black star of Africa”.

“The Asia tigers, South Korea, Japan, Singapore, and Malaysia are where they are today because of the systematic investments they made in the development of their human capital particularly in their youth and this is where Ghana is today. This is the reason why the government since 2017, continues to invest heavily in the development and education of our young people” President Akufo-Addo said.

The President in his brief remarks observed that the five million Ghana cedis (GHc 5,000,000.00) two-floor office complex of the Head of State Awards Scheme, (Ghana Award House) once completed will serve as the administrative block of the Duke of Edinburgh International Award affiliate which will help drive growth, impact and the efficiency and effective delivery of the award scheme to all young people in Ghana and beyond.

“Ghana will be the second country in Africa apart from the President’s Award of Kenya, one of the few countries globally to have its own administrative office” The President noted.

The Head of State Award is a non – formal education framework that inspires young people to dream big, celebrate their achievements and make a difference in their world. It is the licensed operator of the Duke of Edinburgh’s International Award in Ghana and they are not limited by boundaries. There are thousands of young people currently completing their own unique Award program, via hundreds of youth-focused partners and operators, including schools, youth organizations, religious youth groups and youth offender institutions.

Need for the HoSA

There are 1.8 billion young people aged 10-24 in the world today. There have never been more young people of this age group alive in history. Though fast-paced developments in technology mean the world has never been smaller or more accessible, it has also become increasingly unstable, uncertain, and often insecure. Although the Award is more than 60 years old, it is as if not more relevant today than it ever has been.

Today’s young people need to be able to tackle the ever-changing world they live in – and to do that, they need transferrable skills such as adaptability, communication, resilience and problem-solving. Government and leaders around the world are also recognizing the importance of non-formal education and the Award’s activity aligns with a number of the UN’s Sustainable Development Goals.