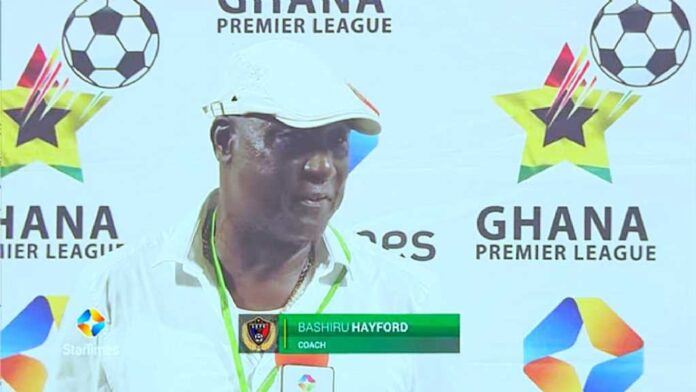 Head coach of premier league side Legon Cities Bashir Hayford has revealed their progress as local coaches is been hindered by poor officiating by Ghanaian referees in the league.

His comment comes in the wake of the Royals 2-1 defeat to Berekum Chelsea in Dormaa in the Ghana premier league.The Veteran trainer was left fuming over the performance of referee Selorm Yao Bless in their game against the Berekum lads.

Legon Cities had a goal disallowed, leaving the coach furious .Speaking after the game, the veteran coach revealed the referee was threatened by fans of the home team forcing him to make calls against Legon Cities.

According to the former Kotoko and Ashgold coach, some fans of Berekum Chelsea intimidated the referee prior to the start of the game, saying they will beat him like the way some referees were assaulted last week in Wamanafo.

“We played so well and we were on top of this game and it’s a hard defeat to take. In the tunnel, referees were threatened by home fans that if they do not win they will unleash a ‘Wamanafo’ attack on them and that led to some bad calls from the referee,” he said in a post match interview.

“They will beat you like a Wamanafofo and so what” an angered Bashir Hayford concluded.