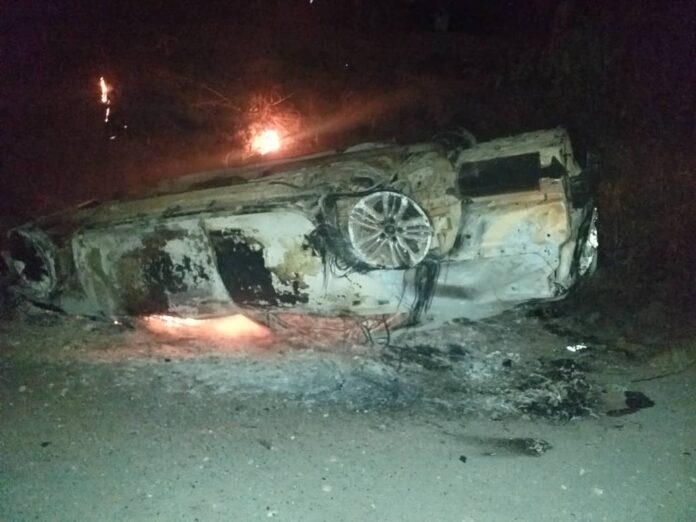 Angry youth of Amanase in the Ayensuano District in the Eastern region have set ablaze a brand new vehicle of suspected ritual murderers and caused damage to a police vehicle in violence the broke out Monday evening in the community.

Five suspected ritualists identified as Prince Adjololo, 26, Solomon Adjololo, 28, Mintah Benjamin, 23, Felix Haya,27, and Akwasi Tenkorang, 27, were arrested by a section of the youth for allegedly attempting to abduct a child in the community for rituals.

The suspects believed to be linked to the fetish priestess and Priest at the centre of the killing of the 11-year-old boy at Kasoa were handed over to Nana Addo Agyekum, Gyaasehene of Amanase and his elders who held the suspects, hostage, while waiting for the Police to pick them up.

Already, some angry youth wielding sticks, cutlasses and other dangerous implements had surrounded the palace demanding the release of the suspect to subject them to instant justice.

Police quickly moved to the palace but the mob resisted them from taking the suspects away.

Reinforcement was called from Suhum and Kibi where the Suhum Police Commander, the Kibi Divisional Crime officer and Coaltar District Commander were in attendance, yet the Police could not march the angry crowd.

The irate mob set fire on a car belonging to one of the suspects and started pelting the Police with stones resulting in damage to a side window of Police service vehicle No. GP 2867 of Kibi Police Divisional Patrol.

Some of the stones hit the Suhum Police Commander as well as the Kibi Divisional Crime officer.

Caught up in the violent attack, the Police then resorted to firing warning shots before they were able to whisk away the suspects to Suhum Police station for investigation.

The acting Public Relations Officer of the Eastern Regional Police Command, Sergeant Francis Gomado confirmed the incident. He said the police is investigating the incident, and that, the media will be briefed at the appropriate time.

The timely intervention of armed Police personnel dispatched from Suhum Friday, April 9, 2021 thwarted an attempt by furious chiefs and residents of Amanase from torching and destroying the shrine of the fetish priestess.

The Chiefs and People of Amanase clad in red and black dresses, armband and headgears mobilized in their numbers and stormed the compound of the shrine in protest.

However, police Personnel from Suhum upon intelligence rushed to the scene to surround the facility and negotiated with the chiefs to rescind their intended plans.