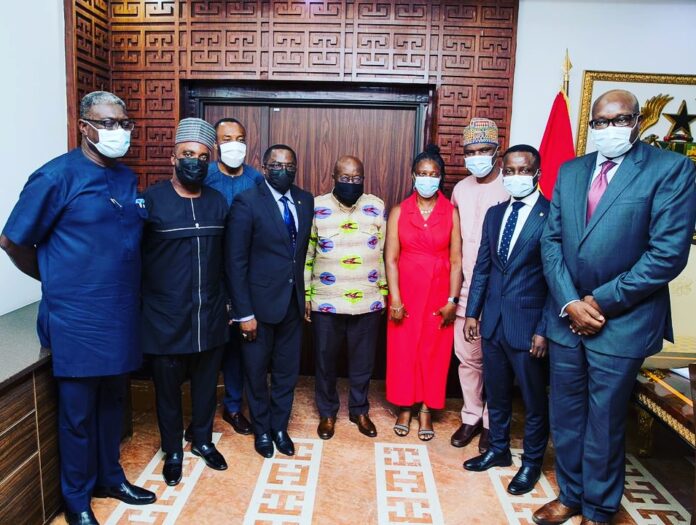 The President of the Ghana Olympic Committee (GOC) Mr.Ben Nunoo Mensah, led a high level delegation of the GOC board to meet His Excellency President Akufo-Addo.

The meeting came off at the Jubilee House on Wednesday 5th May 2021 with a number of key issues discussed.

Key amongst them, was the assurance by President Akufo-Addo that the government will support the current GOC Board to achieve its targets and developmental goals.

The Minister for Youth and Sports Hon. Mustapha Ussif who accompanied the delegation, along with Mr. Mohamed Sahnoon the Secretary General of the GOC and Mr Mike Aggrey, who is the Tokyo CDM and Board Member of the GOC..

President Akufo-Addo took the opportunity to ask the Minister for Youth and Sports to ensure that that incentives such as tax reliefs and recognition of corporate support be made available for the GOC.

He also charged the Minister for Youth and Sports to, as early as possible, come up with modalities and institutionalize a biennial Inter-State Agencies Sports Competition as suggested by the GOC.

The Minister was tasked by President Akufo-Addo to, within the next six months, to draft plans and policies that will help bridge the funding gap between what the sports industry in Ghana needs and what is available at the Sports Ministry.

The inclusion of more females on the boards of various sports associations was addressed.

Mr. Nunoo Mensah congratulated President Akufo-Addo on his re-election for another four-year term in office before proceeding to introduce the newly elected members of the Ghana Olympic Committee who accompanied the GOC President; including the President of Ghana Weightlifting and Deputy Secretary General Hon Jerry Shaib, Mr Fred Acheampong GOC Treasurer and Mr Abdul Hayye Yartey the Chairman of the GOC Communications Sub Committee.

President Akufo-Addo thanked the GOC President and his entourage whilst also wishing them well following their own recent election into offices of competence.