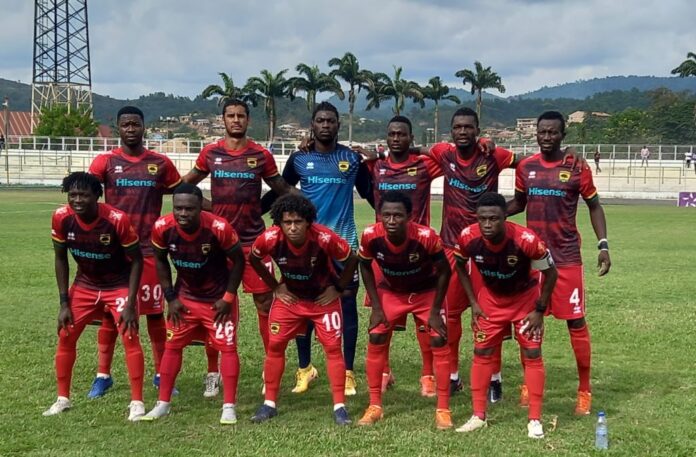 Asante Kotoko came from a goal down to seal a win over Dreams FC in a Ghana Premier League encounter at the Len Clay Stadium in Obuasi.

Asante Kotoko entered the game seeking to a win to return to thwe summit of the Ghana Premier League table but Dreams drew first blood through an Emmanuel Ocran penalty on the 33rd minute in the first half.

The away side were awarded a penalty after Brazilian Fabio Gama handled the ball in the box.

Kotoko however restored parity when Brazilian striker Michael Vinicius scored after a few minutes.  Emmanuel Gyamfi broke from the right-wing and produced a delightful cross which was met with a strong header from Vinicius to level the scores.

Back from recess, Asante Kotoko asserted their superiority over Dreams as they pushed them back with consistent attacks.

Andy Kumi made the needed impact, five minutes after entering the game as the Young striker won a penalty for his side after he appeared to have been pushed in the box.

Abdul Ismail Ganiyu stepped up and converted nicely to give the home side the lead.

Kotoko kept on pushing and were rewarded with yet another goal this time around from Andy Kumi.

The result sees Asante Kotoko move top of the table ahead of Sunday’s Fixtures.