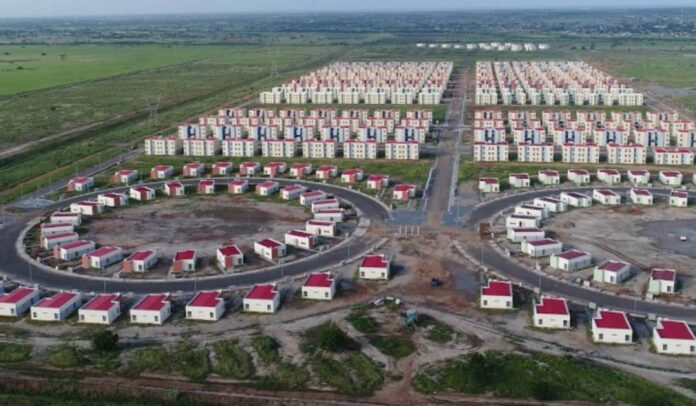 The All People’s Congress’ Hassan Ayariga says over 5,000 Ghanaians have expressed interest and are ready to occupy the abandoned Sanglemi Housing Project.

It comes on the back of the Minister of Works and Housing’s call to Ghanaians to disregard a call by the APC 2020 flagbearer for persons to occupy the facility if government fails to open it up for use within a month.

In the viral video by Hassan Ayariga posted on his Facebook wall, the business man said, “Ghanaians who are ready, I am giving government one month to work on this, if not Ghanaians should move and come and start living in these homes. Just move and come occupy this place. This is sad. This cannot be acceptable. Windows hitting and breaking every second. Look at the roads in the community. If not for Africa will a sensible human being build this and throw it away, if it’s your own resources”?

In response the housing Minister Asenso Boakye described the cited a myriad of reasons the project was yet to be opened for occupancy and also took a dig at the APC 2020 flagbearer describing his video as diabolical and populist.

“These facts are not information exclusive to the Ministry and could easily be found in the public domain due to the extensive news coverage the issue has garnered over the past four years. For this reason, the Ministry finds this video to be a grandstanding gesture laden with diabolical intent, to say the least”The minister’s statement noted.

The Bantama MP also urged the general public not to pay heed to the call by Mr. Ayariga to occupy the facility without is the project being completed.

“The Ministry will ask the general public not to be wooed by the populist appeal by the producers of the video in question to indulge in recklessness in the name of forced occupation (of an incomplete development) since, in the absence of the primary infrastructure, it has consequences for their own health and safety”.

But Hassan Ayariga has hit back at the minister describing the response as unfortunate and childish. Speaking to Starr News, Mr. Ayariga called the bluff of the minister as he maintained his stance on leading persons in need of homes to the facility to occupy it if the 30 day ultimatum expires without any action from government.

“Let him (Asenso Boayke) know that I have a list of over 5,000 Ghanaians calling me and have already sent me their names and locations and telephone days waiting for the 30 days for me just to lead them there. And we’ll see whether he will bring his armor vehicles and take over the people. 30 days is the ultimatum, let’s see who is who”.

The businessman also indicated that they (occupants) were ready to pay for the homes.

Mr. Ayariga also revealed that he had received calls from the Jubilee house assuring him that government was going to work on the situation.

“But let him know that I have gotten serious calls from the seat of government believing and understanding my cry for the people of Ghana and promising me that the thing will be done within the 30 days. And I am aware that he has been given orders to do that”.

“I am standing by my 30 day ultimatum. He will see the number how many people will move to those places. The Military and the police will all move there. He should bring his own military”.