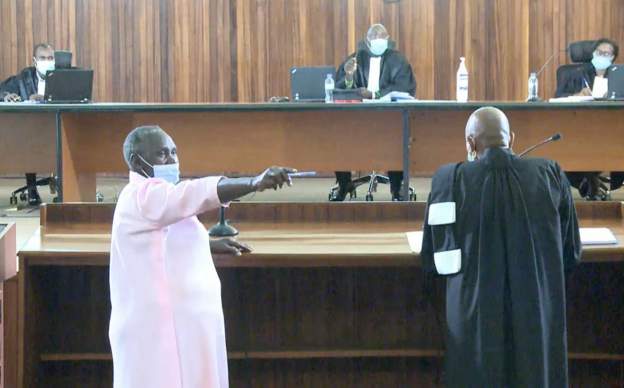 Angeline Mukandutiye, the only woman in a group of 21 Rwandans facing terrorism charges, has admitted to recruiting girls for a Rwandan opposition group that operated in neighbouring Democratic Republic of Congo.

The group includes Paul Rusesabagina, the man portrayed as a hero in the 2004 film Hotel Rwanda about the Rwandan genocide. He denies any wrongdoing.

Ms Mukandutiye, 70, showed judges at a high court in the capital, Kigali, some of her co-accused who were together with her in CNRD – FLN.

The former school inspector fled Rwanda in 1994 and took up the role of the commissioner in charge of family and development at CNRD-FLN.

On Thursday, she told the court that she believed they were “seeking unity and democracy in Rwanda”, but denied playing a role in deadly attacks in the country between 2018 and 2019.

“As commissioner…we were often attacked by other rebels, I thought of what I could do and proposed to our leaders that girls can be given military training to defend ourselves.

“I mobilised [girls] and they liked it. I made a list of volunteers and gave it to those who did recruitment,” she told the court.

When asked about the number of girls she enlisted, she said “they were many in fact, that’s all I can tell you”.

She denied reports that underage girls were recruited.

In late 2019 the DR Congo army attacked positions of the rebel group and captured many of its members and their families.

Many of them were repatriated to their home country. Ms Mukandutiye was arrested on arrival in Rwanda.