The National Security Ministry has denied claims that it cloned the phones of some convenors of the social media protest #FIXTHECOUNTRY during their meeting with them last week.

A convener of the group has claimed the security agency tapped their lines while they were compelled to meet several ministers when they were scheduled to meet the Inspector General of Police over their planned street protest.

However, in a statement, government said the claims of phone cloning are baseless and must be disregarded. 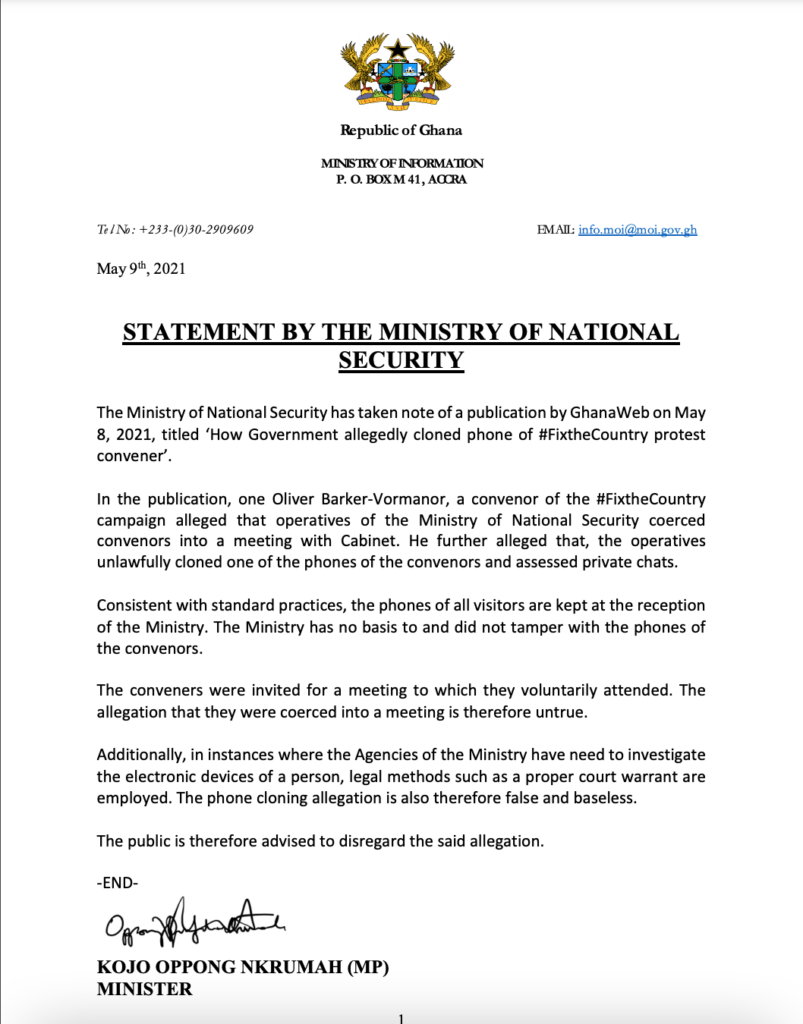 Meanwhile, the group says  they will intensify their voices on social media today since the court has stopped them from hitting the streets.

The Police Service on Thursday secured a court order to stop the planned protest scheduled for Sunday, May 9, 2021.

The High Court presided by Justice Ruby Aryeetey issued a Restraining Order against conveners until the restriction on public gathering is lifted.

The convenors of the filed a write to challenge the court order at the Supreme Court but the apex court has set June 8 for hearing – a month away from the planned schedule for the protest.

The group however says they will resort to other creative ways to express their concerns about development in the nation.

“We also ask you to Wear Black throughout Sunday. Wherever you are! Whether you are in a Trotro or a V8, Wear Black. On each Hour Between 1pm and 4pm, we are inviting everyone including Trotro, taxi, and uber drivers, and Okada riders to blow their horns for 1 minute.

“On each Hour Between 1pm and 4pm We ask all of you at home, in all your communities to bang on utensils for 1 minute. Upload pictures online of yourself wearing Black, with the hashtags,” a statement by the group said.

It added: “Record videos of yourself! Pouring out your issues that need to be fixed! to the world! The world needs to hear us!

. upload them online with the Hashtags”.