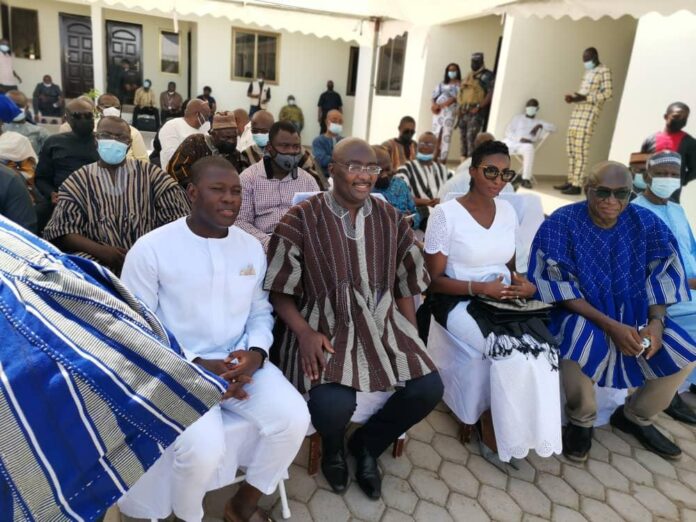 Mourners from all walks of life thronged the Upper East Regional town of Sirigu to commensurate with businessman, Mr. Roland Agambire, whose late mother was laid to rest over the weekend.

The late August Augustina Akandiga Akwara Agambire, 64, died on June 3rd and was known to be a staunch supporter of the New Patriotic Party ( NPP).

Her funeral attracted an array of dignitaries from the business sector, government, opposition political parties and traditional leaders.

Vice President, Dr. Mahamoud Bawumia led a government delegation that included some Ministers of State, Chief Executives of some state institutions, municipal and District Chief Executives and officials from NPP in the Upper East Region.

Also present were the Majority and Minority Leaders in Parliament, Hon. Osei Kyei-Mensah–Bonsu and Hon. Haruna Iddrisu respectively as well as Tagoe Sisters and some religious leaders.

Tributes eulogised the benevolence and unifying nature of the woman commonly referred to as Mother in the Sirigu and surrounding communities.

She was passionate about children, particularly orphaned children.

Interior Minister Ambrose Dery said Mother Akandiga will be remembered for her love for peace and unflinching commitment to the welfare of people, especially the vulnerable.

Former Member of Parliament for the area, Mr. Leo Kaba paid glowing tribute to the late madam Augustina Agambire recalled her supporting role in the party in the Region.

” She was a mobilizer and even in the trying periods of the party, she stood firm and remained committed to the ideals of the party”, Mr. Kaba added.

Mother Akandiga was a Princess and her good counsel was trumpeted by elders, chiefs and traditional leaders.