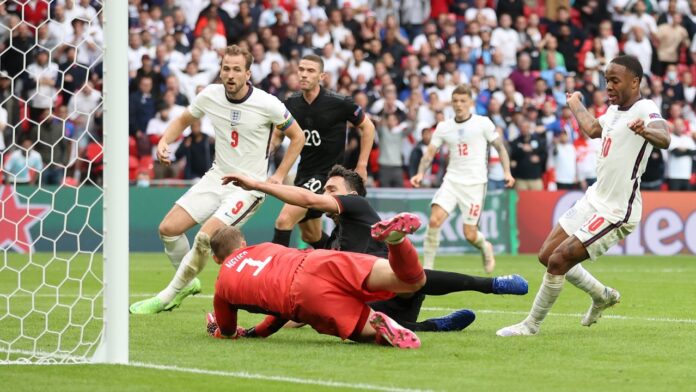 England struck twice late on to end a 55-year wait for a knockout tie victory over Germany amid scenes of huge tension and elation to reach the Euro 2020 quarter-finals at Wembley.

Gareth Southgate’s side battled hard to earn the statement victory that has so often eluded England, and it was their talisman of this tournament, Raheem Sterling, who made the decisive breakthrough.

Sterling, who scored the winners against Croatia and the Czech Republic in the group stage, steered in Luke Shaw’s cross after 75 minutes to send England’s fans, with more than 40,000 inside Wembley, into wild celebrations.

The win was secured with another moment of significance four minutes from time when Captain Harry Kane, who had once again struggled to influence the game, headed in from substitute Jack Grealish’s perfect delivery for his first goal of Euro 2020.

England were once again thankful for the brilliance of Everton goalkeeper Jordan Pickford, who has yet to concede a goal in the tournament and saved crucially from Timo Werner and Kai Havertz in each half, while Thomas Muller missed a glorious chance to equalise before Kane struck.

Southgate’s side will now face either Sweden or Ukraine in the quarter-finals in Rome on Saturday.

Southgate’s team selection once again raised eyebrows when he decided to leave the creative talents of Grealish and Phil Foden on the bench and showed huge faith in Arsenal teenager Bukayo Saka by starting him after his fine performance against the Czechs.

Saka was excellent, the early spark when England struggled, while Grealish added the crucial X factor when he came off the bench to finally help break Germany down.

The scenes at the final whistle demonstrated just how important this win is for Southgate and England, digging deep and surviving periods of struggle to overcome the old rivals who have so often got the better of them in situations like this.

And this may just rank as the biggest and most important of Southgate’s time in charge.

The last 16 was round that carried so much jeopardy for England when the draw was made, with the knowledge that topping their group would likely mean a meeting with the ever-dangerous Germany, World Cup holders France or reigning European champions Portugal.

While Group F minnows Hungary very nearly caused a huge upset, in the end it was Germany who confronted them and Southgate, who must tired of seeing replays of his penalty miss against them in the Euro 96 semi-final, now has a happy memory to cherish, not to mention a potentially favourable route forward in this tournament.

England will feel confident but not complacent against Sweden or Ukraine, and the shock exit of France to Switzerland shows no-one can be taken lightly.