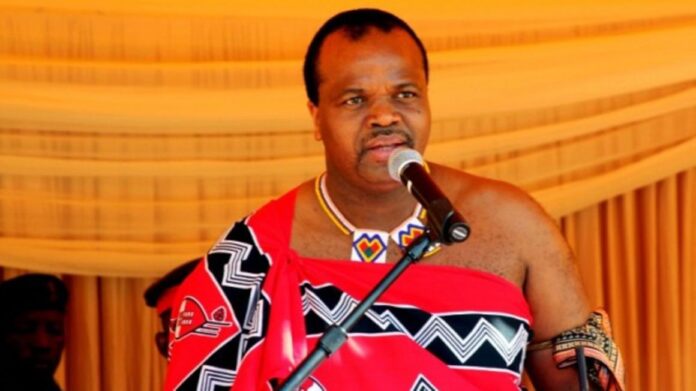 On Monday evening, Eswatini’s leading chain store, OK Foods, situated in Matsapha, and other outlets, were set on fire as pro-democracy protests turned into chaos, bringing the first threat on a monarch who has ruled the landlocked southern Africa country with a free hand.

The country has been facing protests for several days in at least 10 different places, forcing the police to disperse protestors with tear gas and live ammunition, leading to injuries.

The Eswatini leader rules the country as an absolute monarch and he is the one who chooses the prime minister, ministers, judges, and civil servants.

The protesters are calling for political reforms and want to elect their own prime minister. Political parties have been banned in the country since 1973.

“The time for the royal system characterised by dictatorship is over.”

The latest protests were sparked by a decree banning the delivery of petitions.

The Swaziland Solidarity Network (SSN) on Monday said the King had fled in his private jet to an unknown destination.

“These allegations started after his jet was seen flying from Matsapha airport in the evening.

“Whatever the truth about the king’s whereabouts is, the situation on the ground in the country is extremely volatile as supermarkets and industrial plants have been set alight by unknown people while the army has already been deployed to control the situation. There are allegations that more than one bystander or protestor has already been killed by the army or the police,” SSN spokesperson Lucky Lukhele said in a statement.

The Solidarity Network called on the international community to step in and play a proactive role in minimizing casualties.

“The Swazi issue should now be the top priority of the SADC. King Mswati and his cohorts should be held accountable for the mess that the country finds itself in,” Lukhele added.

For many years, King Mswati III has been criticized for his lavish lifestyle and alleged human rights violations.

The polygamist with at least 15 wives and 23 children was selected to be the next King at the age of 14 and he was crowned King shortly after his 18th birthday in 1986. He has been in power since then.

On Friday last week, hundreds of young Swazi protesters clashed violently with police at a demonstration against the ruling authorities in Africa’s last absolute monarchy.

Shops were looted and one was set ablaze during the clashes in the township of Msunduza, near the capital Mbabane, with the unrest continuing into the night.

“Today we witnessed the anger of the Swazi youth against the autocratic system,” said Wandile Dludlu, secretary-general of Swaziland United Democratic Front, an alliance of pro-democracy groups.

But last week, around 500 youths protested in the Manzini district, around 30 kilometres from the capital, demanding democracy.

The government had on Thursday last week banned protests, with National Police Commissioner William Dlamini warning that officers would be “zero-tolerant” of breaches of the ban.

The king, crowned in 1986 when he was just 18, has come under fire for his expensive tastes and spending while most inhabitants live below the poverty line.

In 2019, the country was rocked by a series of strikes by civil servants who accused the monarch of draining public coffers at the expense of his subjects.