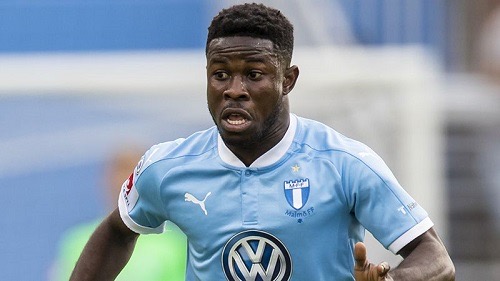 Ghana international Kingsley Sarfo has revealed that he regrets joining Swedish club Malmo FF instead of the Big European clubs that made overtures at signing him from Sweden.

Speaking Exclusively with GhOne TV sports, Sarfo said he had a lot of offers coming his way during the summer he joined Malmo, adding that the Swedish side’s offer was the least he received in terms benefits but he had to make the move to Malmo because of the offer the Swedes made for him to naturalize playing for the national team for which reason he needed to stay in the country for another year. A decision he now regrets making.

“Manchester City, Monaco, Sevilla, RB Leipzig, and a whole lot of teams from Russia, England, Spain, Italy all made offers to me in that summer, Malmo was the least offer I received,” he said.
“I regret the decision to stay in Sweden and join Malmo instead of one of these big teams in Europe”.

The Kumasi-born mercurial midfielder also revealed that his decision to opt to play for Ghana instead of Sweden was the rationale behind all the problems he had, from the accusations, unfair trial and jail term while playing football in Sweden.

“The prosecutor one day in court asked me why I didn’t play for the Swedish national team but rather Ghana and I told him I’m a Ghanaian and my families are all Ghanaians so Ghana was the best choices for me.”

“Then he replied and told the judge that I had nothing to do in Sweden then so I should be sent back to Ghana” he told GhOne TV’s Benjamin Yamoah.

Sarfo was sentenced to jail for allegedly raping a minor while his contract at Malmo was terminated.

However, the 26-year-old is now out of prison after serving his term and has hit the ground running at his new club Olympiacos Nicosia in Cyprus where he has been made the captain after an impressive season.