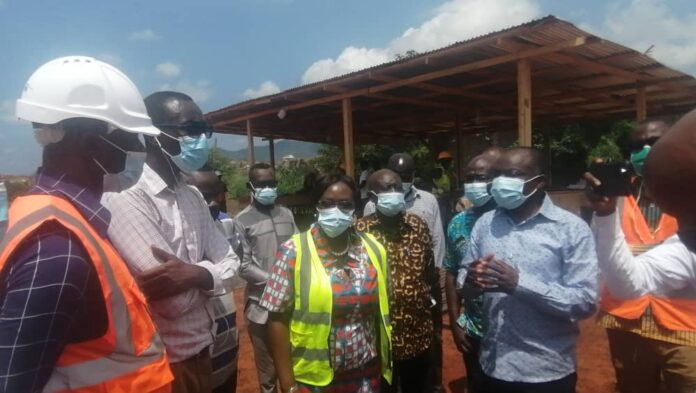 Measures put in place for the reconstruction of the Nkawkaw Sports Stadium in the Kwahu West Municipality are set to meet standards of the Federation of International Football Associations (FIFA).

Speaking at a Press Briefing during the site’s inspection, Chief Executive Officer (CEO) for Middle Belt Development Authority, Joe Danquah, elaborated carefully planned design elements that would be combined for effective reconstruction of the stadium.

“We had to make new designs and drawings and these drawings and designs need to pass through procurement process for our request to be granted then finally, hand over everything to the Contractor”, he said.

These designs and drawings, according to him, are in line with that of the Federation of International Football Associations’ (FIFA’s) standards for constructing a sports stadium.

“We have made provisions for the involvement of all the things that FIFA demands in setting up a stadium. The likes of a dressing room, emergency room and a press conference room,” he said.

Last year, sod-cutting ceremony was held for the renovation of the Nkawkaw Sports Stadium. The construction however delayed to be processed.

This, Mr. Danquah explained that “at the sod-cutting ceremony, we found that our original intentions of rehabilitating the Stadium will not be helpful. This was why work could not be continued”

He added that “reconstruction was the best alternative because we had considered the interest of the people of Kwahu in Sporting activities”.

Following the Stadium’s reconstruction decision, Mr Danquah disclosed at the Press Briefing that “currently, Middle Belt Development Authority with Faradel Construction Company have signed a contract to reconstruct phase one of the Nkawkaw Sports Stadium”.

He further revealed that the reconstruction of the first phase of the stadium is at a cost of Fourteen Million, Two Hundred and fifty thousand Ghana Cedis (GHC 14,250,000) for a period of one year.

He concluded by giving the people of Kwahu an assurance that the construction company is fully committed to doing their job effectively within the one-year contract period adding that at least 30% of the locals will be employed.