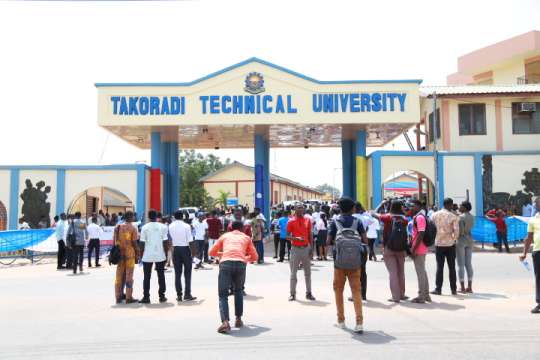 The Takoradi Technical University in the Western region has rusticated sixty-five (65) students of the University for various Examination Malpractices.

A document intercepted by Empire News means the affected students can no longer hold themselves as students of TTU for two semesters.

Confirming the university’s decision to Empire News’ Emmanuel Ohene Gyan Public Relations Officer of Takoradi Technical University, Ekow Payin Nketsiah Richardson, said the decision was taken after the disciplinary committee exhausted all its processes and took the decision to rusticate the affected students effective from the second semester of the 2020/2021 academic year

“As a centre of excellence we can achieve a lot only if we churn out good products, and it involves discipline, we want the corporate world to value our certificates, examination malpractices is a serious offence and the school frowns on that.”

Richardson emphasised out of the sixty-five rusticated, fifty-one (51) of them are males while fourteen (14) of them are females.

The other department including welding, construction, accounting, among others had between five (5) to just a student (s) being rusticated.

Meanwhile a level 300 procurement and supply student, Constance Asante has initiated legal processes against the management of Takoradi Technical University for including her name in the list of students who have been rusticated for various examination malpractices.

Uncle of the student, Kingsley Fredricks has also accused the disciplinary committee of TTU of what he claims to be twisting of facts of her siblings when she appeared before the committee after she was charged with what the university termed as misconduct.

Constance Asante was charged with unacceptable conduct (improper use of university’s logo without authorisation, assembling and plotting to organise an unlawful demonstration, inciting students against management and displaying posters to demonstrate on all social media without approval.

But her uncle in a separate interview with Emmanuel Ohene-Gyan denied all the charges claiming that his niece only wanted a breakdown of the school fees structure after they realised that the school fees posted to students for payment is different from what was on the students portal.