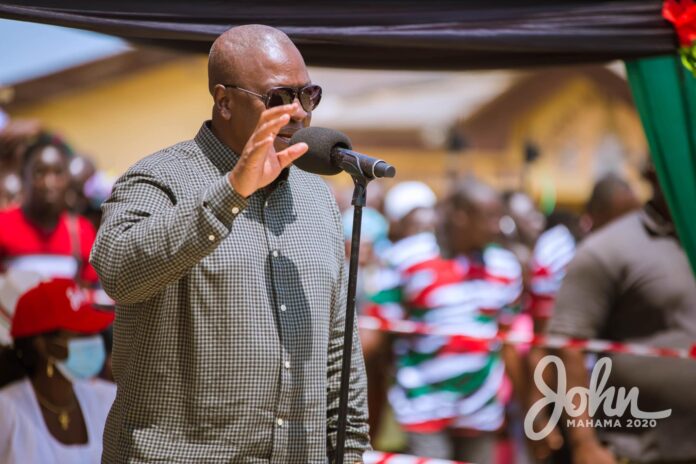 Former President John Dramani Mahama has described the outcome of Ghana’s 2020 presidential general elections as an event God purposed to prove a positive point in favour of the opposition National Democratic Congress (NDC).

The Supreme Court upheld the EC’s declaration against a petition filed by the NDC challenging the result announced by the EC. Nonetheless, the umbrella party upholds its position that it did not lose the polls to the elephant side.

Mahama, talking to the electorate in a speech delivered on his behalf by a former Minister for Food and Agriculture, Alhaji Limuna Mohammed-Muniru, said although Ghanaians endorsed him over his main contender (Akufo-Addo) at the December 7 polls, God in His flawless wisdom chose to shelve the power meant for him (Mahama) for the moment in the NDC’s best interest.

“It is not all that glitters that is gold. Today, if John Mahama were in power and we have dumsor (regular power cuts) what would you say? So, God in His own wisdom knows that the people who have done the ‘shitting’ must come and clean their own ‘shit’ before we come properly. So, when they finish cleaning it, Insha Allah, come 2024, I can assure you,” relayed Alhaji Mohammed-Muniru.

The former Upper East Regional Minister delivered the message when he led a delegation of NDC bigwigs on behalf of the former President to a durbar organised in Nabdam, a district in the Upper East Region, to mark the 10th anniversary of the installation of Na Pa-Riyoung Kosom Asaga Yelzoya II as the Nangonaab (the Paramount Chief of Nangodi). The NDC’s First National Vice Chairman, Chief Awudu Sofo Azoka, as well as the Member of Parliament (MP) for Nabdam, Dr Mark Kurt Nawaane, and former Minister for Information, John Tia, were part of the team.

Your leadership is one of integrity— Mahama to Nangodi Paramount Chief

The event was themed “Celebrating a Decade of God’s own Leadership of Abroug: A Hope for Progress” and also had in attendance eminent traditional chiefs in Ghana and representatives of some other political parties.

“He (Mahama) says your ten years of leadership has been a leadership of integrity and service to your people. Why is he saying so? At least, he can remember a few things that you chalked during your reign as the Chief of Nangodi. You were very instrumental in getting Nabdam to be carved out as a district.

“As an agriculturist, you also introduced what we call dry-season farming for which you were able to get a lot of dugouts, which our brothers would call dams— one village, one dam. In agriculture, we call them dugouts. You were also very supportive to your Member of Parliament to establish a police station in the Nabdam District, and we believe this has curbed crime in the district. You have made history and we pray that you continue to make history,” Alhaji Mohammed-Muniru added.

When the Upper East Regional Chairman of the NPP, Anthony Namoo, took his turn to address the anniversary gathering, he said the irritating clouds of dust which were popularly associated with the Bolgatanga-Bawku-Pulmakom Road for many years had been relegated to the dustbin of history because the international highway had been reconstructed and given an asphalt overlay under the current NPP government. He pointed at the recent appointment of former MP for Nabdam and high-ranking member of the NPP, Boniface Gambila, as Ghana’s Ambassador to Burkina Faso as a strong index of Akufo-Addo’s love for the people of Nabdam. The NPP government, Mr Namoo disclosed, also hoped to upgrade the old police station in Nabdam’s capital, Nangodi, to a district command.

The Paramount Chief of Nangodi is widely described as a leader who truly wants to see every youth gainfully employed and happy. And it is often said of him that when any jobless person approaches him for a job, he searches for the sought job with a burning desire on behalf of that job seeker as if he were the one who needs the job.

The crowd, the calibre and the colour seen at the carnival organised to mark his decade on the centuries-old skin, observers say, were a testimony to the selfless leadership he is said to have shown since 2011.

Addressing the durbar, surrounded by sub-chiefs, the Nangonaab, who is also a member of the National House of Chiefs, said: “My ten-year reign has been a very sweet and smooth one. It was done by God. People see me as a man who thinks of others. I just want to say that I have lived my chieftaincy life trying to bring advancement to my people, to develop the human resource.”