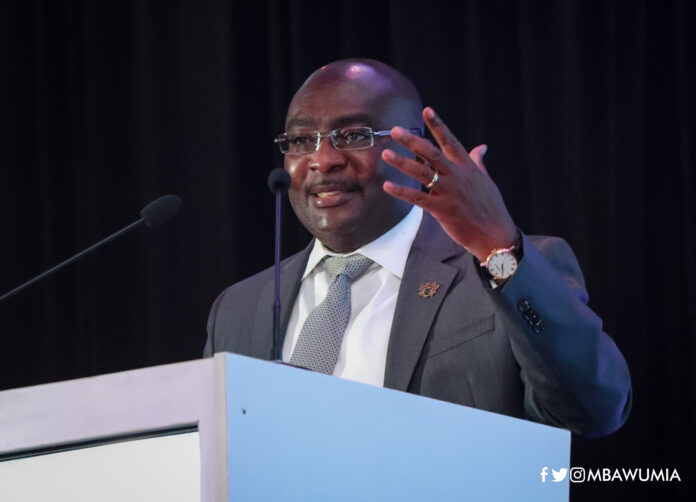 Government is set to endorse a comprehensive National Integrated Maritime Strategy that will enhance interagency cooperation and thereby boost the collaboration among Land, Sea and Air Forces and key stakeholders in the country, Vice President Bawumia has disclosed.

The Strategy is part of ongoing efforts by government to put in place a framework, in collaboration with other stakeholders across the world, to address the surge in attacks by Pirate Action Groups (PAGs) and increasing incidences of Kidnapping For Ransom (KFR) in the Gulf of Guinea, a key maritime highway for international commerce.

Addressing participants at the ongoing International Maritime Defence Exhibition and Conference (IMDEC ‘21) in Accra on Wednesday, 07 July 2021, Vice President Bawumia said government is determined to modernize and re-equip the Ghana Navy and other sectors of the Ghana Armed Forces as well as key stakeholders to scale up their level of readiness to face the growing challenge.

“For a start, the government is acquiring Offshore Patrol Vessels (OPVs), Fast Patrol Boats and Crafts. In addition, the government is making funds available for the timely completion of the Forward Operating Base at Ezinlibo and there are plans to establish similar bases on our coastal frontiers.  The government will also see to training and welfare of the Naval Personnel to put in their best and to remain professional in the discharge of their duties.

“Other stakeholders are not being left out of the task as the Ghana Maritime Authority, Ghana Ports and Harbours Authority, the Fisheries Sector, the various institutions in the oil and gas sector and the entire maritime industry, are being supported and encouraged for their own transformation.

“That is not all, government is set to endorse a comprehensive National Integrated Maritime Strategy that will enhance interagency cooperation and thereby boost the collaboration among Land, Sea and Air Forces and key stakeholders in the country. This is required because securing the maritime domain for a developed blue economy entails coordinated actions among all key stakeholders in the country” he emphasized.

Citing statistics, including a 34% increase in actual and attempted pirate attacks in 2020 in the Gulf of Guinea, as well as a rise in the number of cases of Kidnapping for Ransom (KFR) and hostage-taking, which indicate that in 2020, 130 out of 135 persons kidnapped globally were reportedly abducted in the Gulf of Guinea alone, Vice President Bawumia reminded participants that criminals are not bothered by international boundaries.

“It is important to remind ourselves that the threats to maritime security and safety transcend borders. They affect international trade. A threat to one coastal nation is a threat to others. The sea is the super highway for global trade and Africa’s quest for a Continental Free Trade Area cannot be successful without a secured maritime domain.

“A more serious concern is the fact that the criminals at sea are evading counter-piracy measures and have even become emboldened thereby scaling up the insecurity and threat profile in the Gulf of Guinea.  Reports indicate Pirate Action Groups have increased their operational range while the spread of attacks has also changed from the primary enclave in the Niger-Delta extending both westwards and south-eastwards to the whole of the Gulf of Guinea region.

“The Ghana government therefore deems it important to ensure effective cooperation and positive collaboration among Regional Navies through coordinated maritime law enforcement activities especially the integration of the Naval and Air Forces’ efforts in suppressing insecurities in the maritime sector, building trust among partners through information-sharing and application of best management practices.”