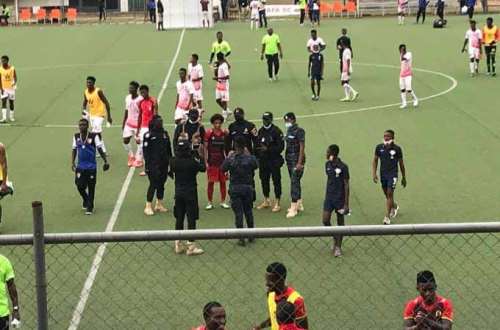 Referees manager at the Ghana football Association Retired referee Alex Kotey has tasked police officers assigned to match venues to focus on the crowd and stop watching games with the fans to curtail crowd violence.

Referee Hanson was unable to continue the match after the incident, bringing a premature end to the game. The Regional Police PRO for the Bono region, ASP Okai Patrick Kodjoe, has strongly rejected claims that the attack on referee Maxwell Hanson at the Coronation Park was as a result of security failure. But retired Referee Alex Kotey disagrees. Speaking in an exclusive interview with Starr FM Sports the retired   referee said it’s about time the police service up their game by being proactive at match centers during games.

“You see if we look at other countries in Europe, you see the policemen, security   or stewards not watching the game but in our case the security officers will be watching the game and so how will he pick any intelligence from the crowd or sense danger nothing”

“So for me I think there is a lot to be done though I know they are professionals   yes we know that but they need to undertake more training “Retired Referee  Alex Kotey told Starr Sports.

“If you have your back to the crowd, how would you see whatever is going on”

“So they should be proactive in tackling crowd violence at the various stadia” he added.