The Volta Development Forum (VDF), a pro-business Civil Society Organisation in the Volta region has held stakeholder engagements with relevant authorities in the Ketu South Municipality to assess the level of damage caused by tidal wave incidents in communities along the Keta lagoon.

A delegation led by the Executive Director of VDF, Daniel Agboka-Dzegede met with the MCE, Elliot Edem Agbenorwu, Abla Dzifa Gomashie (MP), the Municipal NADMO Coordinator and Planning Officer among others on Monday to have first-hand information on the level of damage and to chart a path towards the relocation of the displaced victims and also to support the government to expedite action on Phase II of the Keta Sea Defence project.

So far, a total of 887 people have been displaced with over hundreds of houses carried away by the sea in communities including Salakope-Amutinu, Adina and Agavedzi.

Speaking during the meeting, the MP, Abla Dzifa Gomashie bemoaned the lack of urgency on the part of the government in providing decent accommodation for the victims.

She impressed it on the delegation to add their voice to earlier calls made on the government to provide accommodation for the displaced victims until the sea defence project is completed.

In response, the MCE Elliot Edem Agbenorwu revealed that plans were far advanced towards the provision of temporary structures that will accomdate the victims but were quick to add that the Municipal Assembly will need more time to engage the displaced victims to accept any form of relocation plans.

He said, “The key thing for us to do is to provide the displaced victims with a temporal accommodation. However, one thing that is cardinal and keeps arising from the preliminary engagements we have done is the issue of livelihood; so what we need to do is to assure them of an alternative livelihood before we can move them and I think we need some more time to engage them -this is where they have lived all their lives and so they need that assurance before we can move them.”

The MCE also revealed that a water facility has already been provided at the new site which the victims are being asked to relocate to.

Speaking on behalf of the delegation, Chairman of the VDF, Dr. Kofi Kludjeson indicated that further engagements would be held with the Volta Regional Minister, the Minister for Works and Housing and the Ghana Hydrological Authority with the aim of speeding up efforts towards the commencement of the project.

He also stated that the Volta Development Forum would lend support to government in any form to the project in line with the vision and objective of the group.

The delegation of the VDF also included the treasurer Joycelyn Dotse Ochlich, the Chairperson for Monitoring and Research, Mr Delali Ndo among other members. 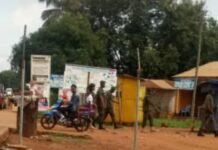