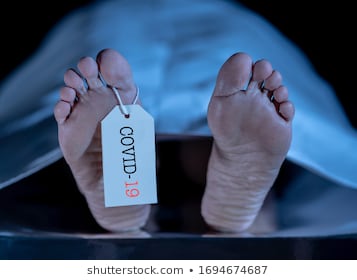 There was drama over the weekend in Koforidua when the body of a woman who allegedly died of COVID-19 was allowed for viewing at the funeral grounds.

The body prepared in a casket was released to the family by the Eastern Regional Hospital after the family disagreed with the hospital that the relative died from Covid-19.

80-year-old Madam Afua Twumwaa was admitted at the Eastern Regional Hospital on 1st April 2021 but died on 14th April. Her body was preserved at the morgue of the hospital.

Doctors say the death was covid-19 related but the family says no evidence or whatsoever was presented to back the claim.

On Friday evening, the family was denied access to the body for burial at the morgue creating misunderstanding.

Undertakers and mourners became stranded at the parlour.

The family returned to the hospital Saturday dawn for further negotiation to have the body as mourners oblivious of the cause of death were awaiting the body to show their last respect.

The hospital released the body to the bereaved family under strict instrunctions including it should remain in the casket and be in the hearse for viewing by the mourners.

The movement of the body was supervised by an environmental officer from the funeral ground and to the cemetery for burial.

In March, the Eastern Regional Hospital was chastised for releasing a Covid-19 body to the family for burial service without the consent of Environmental Officers.

Environmental officers from New Juaben South Municipal Assembly went to mortuary Sunday, March 14, 2021 at about 5:00am to supervise the preparation of the body of the late Janet Nyarkoa, 66, who reportedly died of Covid-19 for safe burial but to their dismay, the body had been released secretly to the bereaved family.

Management of the hospital promised to investigate the circumstances that led to the breach of the burial protocol, however, the outcome of the investigation has not been made public.

It has been alleged that some individuals at the hospital take monies from bereaved families to release Covid-19 bodies to them in clear breach of the burial procedure of Covid-19 bodies.