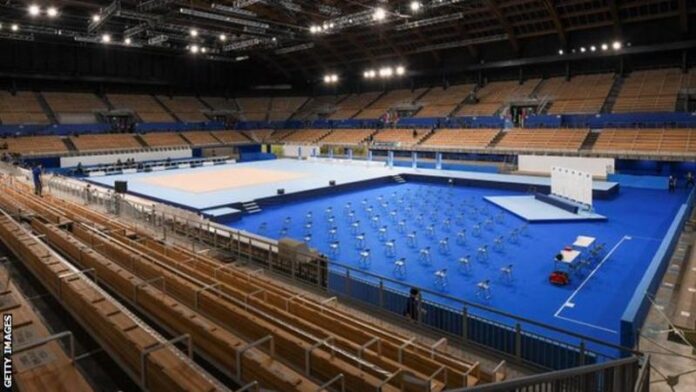 A female USA gymnast has tested positive for Covid-19 and a team member has been identified as a close contact.

The gymnast, who is not displaying any symptoms, tested positive at the team’s training camp in the city of Inzai.

Both athletes have now been transferred to a hotel to quarantine with the rest of the squad having moved to Athletes’ Village in Tokyo.

The US Olympic Committee (USOC) told BBC Sport the athlete was an alternate – a team member included as a reserve.

“The health and safety of our athletes, coaches and staff is our top priority,” read a USOC statement.

“We can confirm that an alternate on the women’s artistic gymnastics team tested positive for Covid-19.

“Out of respect for the individual’s privacy, we cannot provide more information at this time.”

Superstar gymnast Simone Biles, 24, is part of the US team competing at the Tokyo Games.

The news comes after the Czech Olympic Committee announced earlier on Monday that beach volleyball player Ondrej Perusic had tested positive in the athletes’ village, two days after a staff member had tested positive following their arrival in Tokyo on a charter flight from Prague.

Two South Africa footballers became the first competitors to test positive for coronavirus in the village over the weekend.

Organisers say 21 South Africa players and officials have also been identified as close contacts and will self-isolate their rooms, where they must also take daily PCR tests.

All the results on Sunday were negative and as long as that continues, the squad will be will be allowed to train in a bubble as they prepare for their match against Japan on Thursday.

South Africa Sevens rugby coach Neil Powell also tested positive on Sunday on arrival in Japan and is now isolating in Kagoshima, where the squad is based for a pre-Games training camp.

Earlier organisers confirmed six new cases connected to the Olympics including media, contractors and other personnel, bringing the total number of positive cases to 62.

Meanwhile, Six Team GB athletes have been cleared to resume training after they were identified as close contacts of an individual who is not from the Team GB delegation in Tokyo.

The athletes and two staff members from the athletics team were required to self-isolate in their rooms at the association’s preparation camp, but are able to leave after they all produced multiple negative PCR results.

They are training away from other Team GB athletes at present as a precaution.

Dr Brian McCloskey, who has overseen the Covid counter-measures at Tokyo 2020, has suggested the positive cases announced were proof the system to reduce infection was working and that the risk of the virus spreading during the Games is minimal.

“What we’re seeing is what we expected to see,” said McCloskey, who is an expert in emergency planning and led the planning operation for public health services at the London 2012 Olympics.

“If I thought that all the tests that we did were going to negative then I wouldn’t bother doing the tests in the first place. We do the tests because they are a way of filtering out people who might be developing an infection who might become a risk later.