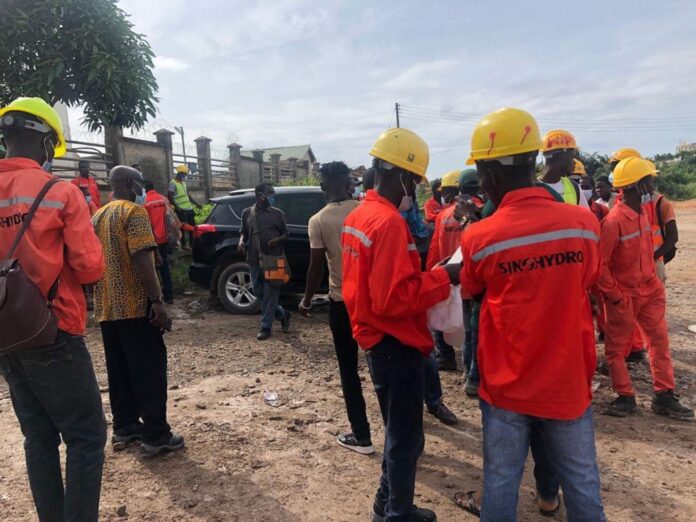 Construction works ongoing at the much talked about Takoradi three-tier interchange is likely to suffer major setbacks following agitations by Laborers working on the project.

The labourers according to Takoradi based Empire Fm are angry over the nineteen (19) Ghana cedis daily mark.

Due to the current situation, the workers have today Thursday, August 26, 2021, laid down their tools to press home for better and improved conditions of service at the construction campsite at Funko in the Ahanta West Municipality.

The two billion dollar Sino project being executed by Messers Sino Hydro Corporation Limited is expected to be completed in thirty (30) calendar months.

Empire News is again reliably informed about a meeting between the project consultant and the contractor about how to quickly resolve the impasse to help speed up the project which is already behind schedule.

The project when completed is expected to improve the traffic situation in Takoradi and its environs.

Some of the displeased workers told Emmanuel Ohene-Gyan that they drew the Western Regional Minister, Hon Kwabena Okyere Darko-Mensah’s attention to their plight with the Minister without delay also summoning the contractor to a meeting where the Messers Sino Hydro management were advised to correct the situation within ten (10) days.

Empire FM further reports that the Regional Minister also directed the Regional Labour officer to look into the matter.

At the time of filing this report, there was a meeting between the leadership of the agitated workers, management of the Sino Hydro and the consultant.