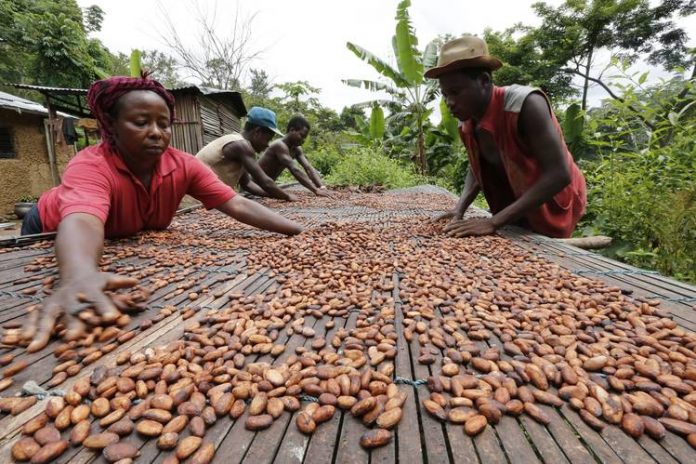 The Ghana Cocoa Board has announced that the Cocoa farmers Retirement benefit initiative will commence on 1st October 2021.

The initiative which was launched by President Akufo-Addo in December last year is to demonstrate government’s commitment to improving the welfare of cocoa farmers in the country.

Ahead of the rollout, COCOBOD introduced the Cocoa Management System (CMS) to create a database of all cocoa farmers in the country to facilitate the implementation of the scheme. After almost a year of building a strong and robust database on farmers across the country through the CMS, the scheme is expected to commence on the 1st of October 2021.

Chief Executive Officer of COCOBOD, Joseph Boahen Aidoo who disclosed this at an event  in Accra noted that “ A cocoa farmers pension scheme is expected to start on 1st October 2021. And this adds to the several fantastic strides and Footprints this government hopes to leave behind. A recent pilot of the cocoa farmers pension scheme which involved some 2,800 volunteer farmers in the New Edubiase District of the Ashanti Region turned out to be a great success. Once fully operational, our farmers will also enjoy this retirement benefit and live happily after retirement from active farming”.

According to Deputy Chief Executive, responsible for Finance and Administration at COCOBOD, the board is equally investing into the scheme to provide cocoa farmers with a decent pension.

“It’s going to be a contributory scheme.COCOBOD is putting money in and as you expect out of every contributory pension scheme, the farmers will also contribute money some money into it. This means that if you’re a cocoa farmer and you retire, there’ll be a nice decent pension for you” he said.

The Cocoa Pension scheme is a Retirement benefit initiative launched in December 2020 by President Akufo Addo for the country’s 1.5 million cocoa famers. In recognition of their hard work, the Ghana Cocoa Board (COCOBOD) was mandated, under Section twenty-six (26) of the COCOBOD Law, 1984 (PNDC L.81), to establish a Contributory Insurance Scheme for Cocoa Farmers within the framework of the Social Security Scheme, so that they could also enjoy a well-deserved pension, upon retirement.