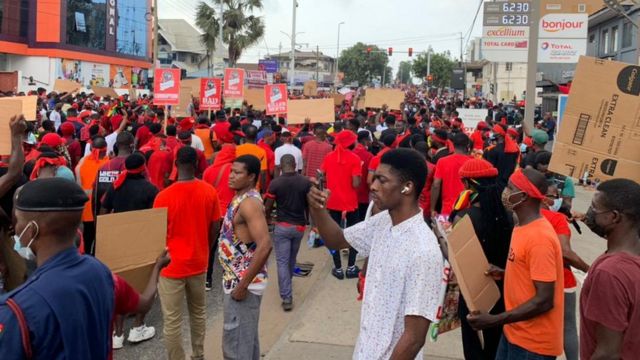 Members of pressure group #fixthecountry have stormed the Western regional capital Takoradi to protest over what they describe as unfavorable conditions in the country.

Today’s protest coincides with the commemoration of the birth of the nation’s first President Dr. Kwame Nkrumah which falls today.

The first protest of the group was held in Accra and was highly patronized.

Some protestors in today’s protest held placards some of which read “Nana Akufo-Addo, we’re suffering. Do something for us. Nothing is working”.

Another said: “The government must wake up”.

Many of the protesters were clad in red with placards asking the leadership of the country to do better. They were holding placards many of which are raising concerns over the levels of corruption and under-development in the country.

Others were directed at youth development and unemployment. A few others are however directed at the conduct of the citizenry and the need to do better.

The group, made up of mainly the youth and social media activists, is demanding better standards of living and good governance.