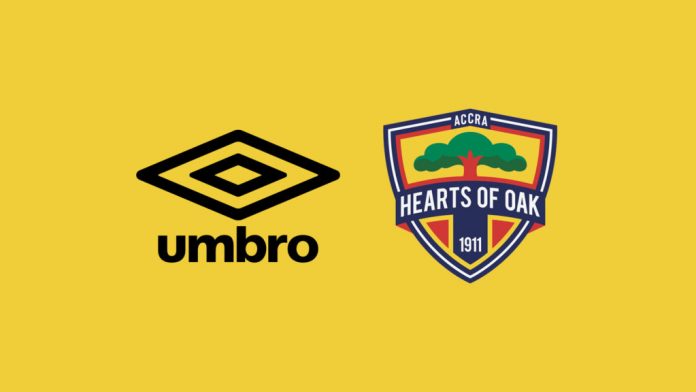 Hearts of Oak and Umbro have unveiled their new Jersey’s after the two bodies renewed their partnership deal until the summer of 2023, the club has confirmed.

The reigning Ghana Premier League Champions entered a three-year deal with the sportswear firm in November 2018 after fruitful discussion.

Umbro became the official kit supplier of Hearts of Oak under the agreement providing the club with on-pitch wear and training kits and footwear.

The kits manufacturers supplied the club’s technical and management teams with Hearts of Oak branded apparel.

The management of the reigning league champions and Umbro have announced a contract renewal for the next two years.

“We are pleased to announce that our partnership with Accra Hearts of Oak has been extended for a further two seasons” David Ricketts, CEO at Umbro South Africa said.

Hearts of Oak will be representing Ghana in the CAF Champions League next season after winning the Ghana Premier League.

The Phobians also won the Ghana FA Cup after defeating AshantiGold SC in the final at the Accra Sports Stadium and automatically becoming the winner of the Ghana Super League as stipulated in the Ghana FA regulations.