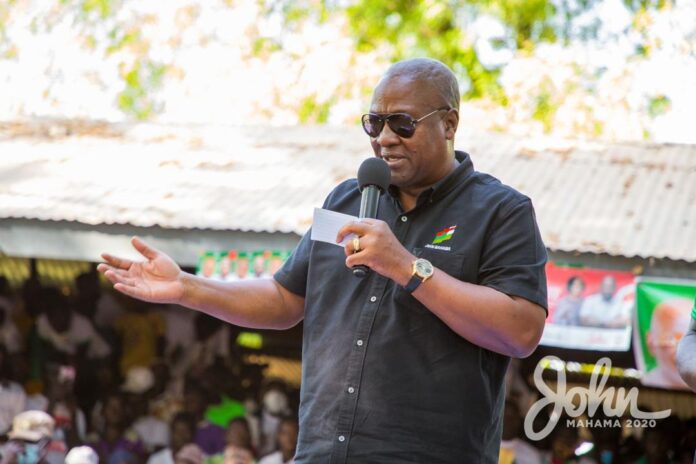 Former President John  Mahama says he cannot change from being a calm and sensitive character to a rowdy one.

According to him, his family and religious upbringing do not permit him to depart from the kind of person he is, explaining that he was in the church before he entered politics.

Answering a question on Akina FM in Techiman, on perceptions that under him the NDC had become more civil, the former President said his beliefs guide his leadership of the party..

“We all have our beliefs and we all have different upbringings. I was not raised to be a ruffian. I was raised to be polite, gentle and civil to every human being. To be sensitive to people irrespective of who you are. That’s how I was raised,” he explained.

He also added, “I can’t change that character and say I am going to be macho, ruffian or fight.”

Mr. Mahama, who is on the second phase of his tour to thank Ghanaians, also rejected the suggestion that he must change, insisting that no life is worth being lost because of power.

“The point is not everyone can do it. But you must not change your character because of politics. For the sake of the peace of the country you must let go of somethings. Otherwise, when one says I won’t agree and another disagrees, people will die… and you have to be responsible” he stated.

“It would be irresponsible to do that. For the sake of peace for our nation, we decided to follow the constitutional route and go to court” he explained.

The comments come in the wake of his recent utterances which have sparked sharp disagreements among Ghanaians.

The NDC leader told a local radio station on Tuesday that the 2024 elections will be a “do or die” affair at polling stations.