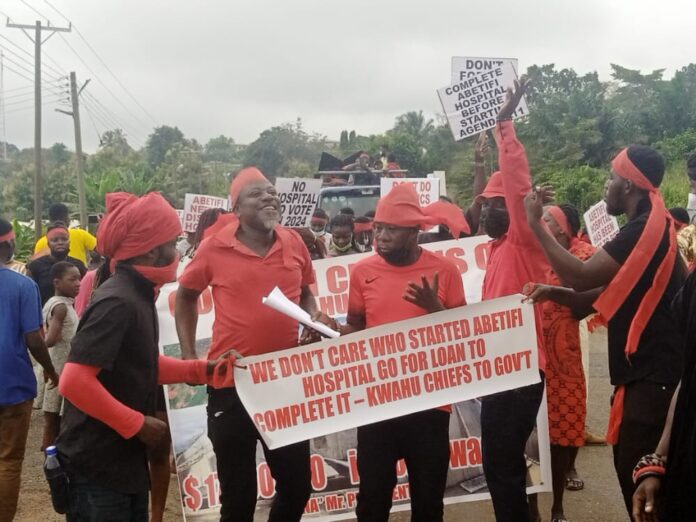 A group calling itself concerned Citizens of Kwahu East District in the Eastern Region on Tuesday, September 21, 2021, demonstrated at Abetifi, the district capital to register their displeasure over abandoned ultra-modern hospital project initiated by erstwhile John Mahama government in 2015.

The demonstration attended by hundreds of residents including some Traditional leadership was to remind the ruling government of the need to complete the 200-bed Abetifi District hospital project which will also serve as a referral hospital for health facilities on the Kwahu Ridge upon completion.

The convenor of the group, Mr. Godwin Ntiamoah, who addressed the media said, all efforts made by chiefs and people in the area to get the Akufo Addo-led government to continue the project have not yielded a positive response.

He said in March this year, the Eastern Regional Minister, Mr Seth Kwame Acheampong, assured during a courtesy call on the Paramount Chief of Kwahu, Nana Daasebre Akuamoah Agyapong II, at his palace in Kwahu-Abene that work will resume on the project soon as funds had been secured for its completion.

However, nothing has happened since.

The convener said Kwahus were expecting the government to capture the Abetifi hospital in Agenda 111 to demonstrate its commitment to the project but the contrary was the case.

“A building that was near completion stage in fact the building was roofed, look at how dilapidated the building is, now the building has become a habitat for animals and weeds. Why should we waste the taxpayers’ money? We voted and what we deserve should be given to we the Kwahu people”

“Historically, we the Kwahu people have not demonstrated before because we don’t depend on the government , we work hard and do developmental projects by our self, God has blessed the Kwahu people already. But look we are talking about health issues here, once you eat you can fall ill . we are not doing politics here, this is not NPP, NDC matter”.

The group presented their petition to the Chief of Abetifi, Akyemfuor Asiedu Agyemang II who doubles as Adontenhene of Kwahu Traditional Area.

The Abetifihene endorsed the demonstration stating that it is disheartening how the hospital project has been abandoned depriving the area of quality healthcare. He pledged to forward the petition to the appropriate quarters.

The government of Ghana, represented by the Ministry of Finance, signed a loan agreement with Barclays PLC of the United Kingdom amounting $175 million to be utilized for the construction of six new district hospitals at selected locations and provide the Takoradi European Hospital with housing units.

The commercial contract was signed in 2012 with Messrs NMS Infrastructure Limited of the United Kingdom to design, construct and equip the six new district hospitals and one other and provide them with integrated Information Technology (IT) systems.

The beneficiary districts are Abetifi in the Kwahu East District, Fomena in the Adansi North District, Dodowa in the Shai-Osudoku District, Garu in the Garu District, Kumawu in the Sekyere District, and European Hospital in the Sekondi-Takoradi Metropolitan Assembly – supplemented with accommodation units.

The project also included the provision of Pharmaceutical Management Systems as well as medical equipment for all the hospitals. The entire project, which had a duration of thirty-six (36) months, commenced in April 2013.

About $136,158,648 was initially disbursed which led to the completion of some of the hospitals.

Disbursement of the rest of the $38,841,352 was however put on hold when the ruling New Patriotic Party, NPP took office in 2017 and commissioned a technical inquiry, which demanded a value for money audit among others stalling the other projects which had reached 50% completion stage.

However, in June 2021, the Minister for Parliamentary Affairs, Osei Kyei-Mensah-Bonsu, presented to Parliament an Addendum agreement on behalf of Minister for Health, Kwaku Agyeman-Manu

The addendum was between the Government of the Republic of Ghana (represented by the Ministry of Health) and NMS Infrastructure Limited, for a restated contract price of $38,841,352 required to complete the full scope of works at the Fomena, Takoradi and Kumawu hospitals.

The agreement which sort to correct Supply contract agreement inadvertently omitted was approved in June 8, 2021.