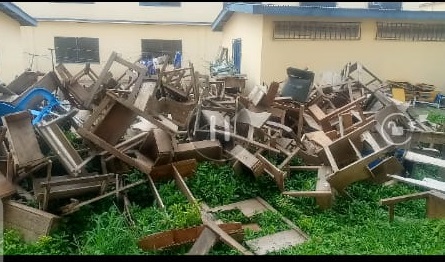 The headmaster of St. Johns Grammar Senior High School at Achimota, Accra, Dr Edmund Fianu has revealed that over 4228 students use dining tables and chairs in their various classrooms due to lack of furniture.

According to the headmaster, the School is overpopulated and lacks enough learning desks for the students to use in their various classrooms.

Dr Fianu explained that all the tables and chairs the government gave them were substandard and have broken down. He added that over 5000 dual desks have broken down and cannot be repaired.

Another challenge confronting the School according to the headmaster is the dormitory beds. He said the dormitories are all overpopulated forcing some students to sleep on the bare floor.

He also stressed that the water crisis is another challenge confronting the School. Students he said, sometimes don’t have enough water to even bath especially the female students and called on the government to come to aid.

He also appealed to the government to complete all abandoned projects the previous government started adding that a dormitory block that has been abandoned for almost 10 years must be completed as soon as possible.

Meanwhile, the Leader and Founder of Penyman Company Limited Mr Eric Ebow Kwesi Taylor in collaboration with the Free Education Movement also a Non-governmental organization visited the school and promised to support the school to do away with some of their challenges.

According to the leader of the foundation, they have been able to give a huge poly tank to help the school store enough water.

He also promised to supply them with enough furniture, dormitory beds and assist them to complete all the abandoned projects in the school.

According to him, they want to help the government to achieve its free Senior High School Policy.