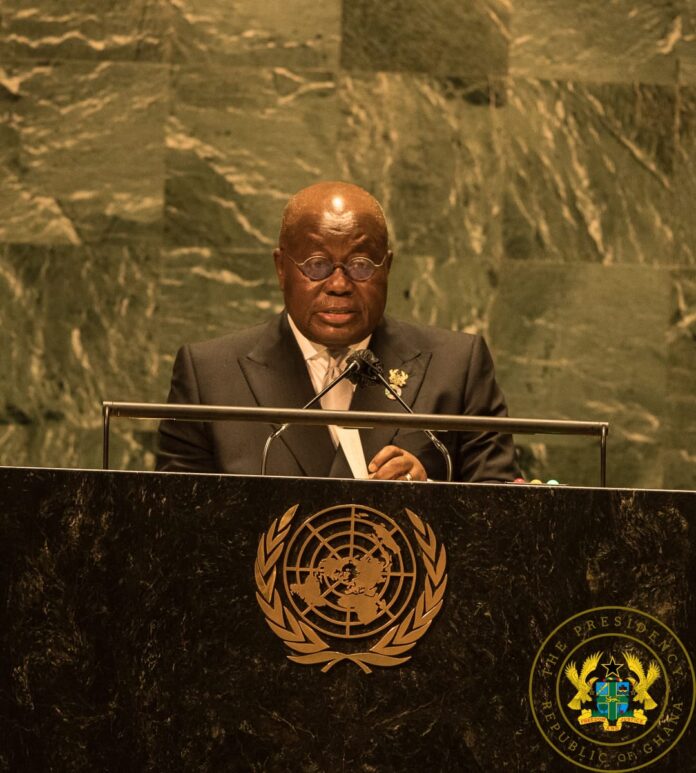 President  Akufo-Addo has decried moves by some countries in Europe in not recognizing Covishield, the Indian version of the AstraZeneca vaccine.

The President made this known on Wednesday, 22nd September 2021, when he took his turn to speak at the 76th United Nations General Assembly, currently ongoing in New York, in the United States of America.

His comments come on the heels of the “simplified travel measures” announcement by recently by the UK Government, and, indeed, by some countries in Europe, which comes into effect from 4th October.

The measures specify that persons who have received double-dose vaccines such as Oxford-AstraZeneca, Pfizer-BioNTech or Moderna or the single shot Janssen vaccine “under an approved vaccination program in the UK, Europe, US or UK vaccine programme overseas” will be considered fully vaccinated.

“What is intriguing is the fact that this vaccine was donated to African countries through the COVAX facility. The use of vaccines as a tool for immigration control will be a truly retrogressive step,” the President noted.

Ghana, President Akufo-Addo said, has so far received five million doses, which have been administered to frontline health workers and those classified as being most at risk.

“Five million is not a figure to be sneered at, particularly when we consider the situation in many other African countries. We are grateful that our efforts at the management of the pandemic and vaccine distribution have been recognised, and we have received these amounts so far. We are still hoping to vaccinate twenty million of our people by the end of the year,” he said.

President Akufo-Addo continued, “Ghana agrees with the call of the Rome Declaration of Global Health for voluntary licensing and technology transfers to boost vaccine production. The Africa Union is working with WHO, WTO and other global partners to expand its vaccine manufacturing and deployment.”

He told the Assembly that Ghana recognised that vaccination is the way to protect populations, and revitalise societies.

In the case of Africa, the President stated that vaccinating seventy percent (70%) of the population in the shortest possible time, as is being done elsewhere in the world, means some nine hundred million Africans have to be vaccinated.

“It is a critical milestone in our collective fight against the pandemic, in a continent suffering the worst brunt of vaccine nationalism. The Africa Vaccine Acquisition Taskforce vaccine programme, partly manufactured in South Africa, is the single largest and most far-reaching trade transaction since the entry into force of the African Continental Free Trade Area in January this year,” he added.

President Akufo-Addo described it as an “eloquent testimony” to the benefits of domestic production and pooled procurement in Africa, as envisioned by the African Continental Free Trade Area Agreement.

COVID-19 has been damaging

Recounting his statement at the 2017 UN General Assembly, where he indicated that he wanted to build an economy that was not dependent on charity and handouts, President indicated that the significant progress that had been made by Ghana between 2017 to 2020, where an average growth rate of 7% was recorded, had been eroded.

“In 2020, when the global economy and sub-Saharan Africa’s contracted by 3.5% and 2.1%, respectively, Ghana was one of the few countries that produced a positive growth rate. This is a testament to our determination to build a Ghana Beyond Aid,” he said.

However, he stated that many economies in Africa are in recession, as the virus’s impact on economies and livelihoods has been devastating.

“The latest numbers from the African Development Bank indicate that African economies, which contracted by 2.1% in 2020, are yet to return to pre-pandemic levels. More than thirty million Africans fell into extreme poverty in 2020, and nearly forty million could do so in 2021,” he said.

The social impact of the pandemic, President Akufo-Addo reiterated, “has been devastating; over one hundred and three million African jobs have been lost. Women, who account for forty percent (40%) of total employment, have been most hard hit.”