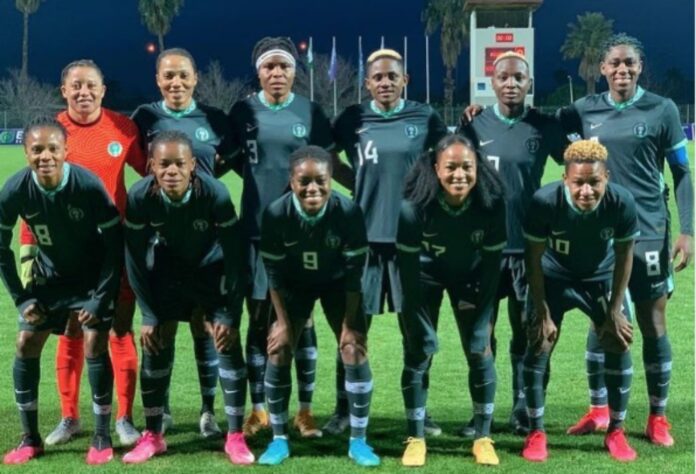 The Black Queens of Ghana succumbed to a 2-0 defeat to their Nigerian counterparts at the Mobolaji Johnson Arena stadium in Nigeria today in the 2022 African Women’s Cup of Nations qualifiers.

Ghana with a team which was dominated by local based players faced a tough time in performance as the Super Falcons of Nigeria proved to be a hard nut to crack from the blast of the whistle.

After a number of close attempts from both sides in the first 15 minutes of the game, Linkopings FC striker Uchenna Kanu found herself at the end of a cross and connected with his head to put Nigeria in front on the 20th minute mark.

Princella Adobea and Grace Asantewa were close to pulling one back for Ghana but their efforts ended in vain as the defence of Nigeria were up to the task. The first half ended with Nigeria holding on to the lead.

In the second half, a number of chances were created by both sides but goalkeepers, Chiamaka Nnadozie and Fafali Dumehasi pulled crucial saves for Nigeria and Ghana respectively to keep  the scoreline at 2:0.

The head coach of Black Queens, Mercy Tagoe tried to at least cut the defeat margin by introducing Sonia Opoku and Naomi Anima but their attacking prowess were still not enough to get Ghana into the game.

The game ended 2-0 after Nigeria’s Oshoala failed to make it three from point blank position.

This is Nigeria’s nineth victory over Ghana which they would hope to extend if they visit Ghana on Sunday for the return leg.