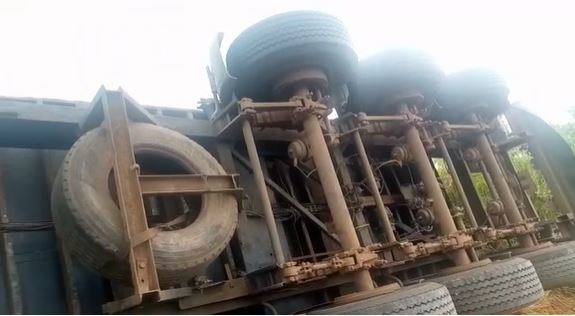 Five people have met their untimely death in a gory accident on Dominase to Mankessim road in the Mfantseman Municipality in the Central Region.

The accident occurred Saturday between a fully loaded taxi cab and a trailer.

Information gathered by EIB Network’s Central Regional Correspondent, Yaw Boagyan indicates that the speeding trailer somersaulted while negotiating a sharp curve following which the taxi rammed into it leading to the instant death of the five onboard the taxi.

The bodies of the deceased have been deposited at Cape Coast Teaching Hospital mortuary for preservation and autopsy.

The trailer driver and his mate who sustained injuries are receiving treatment at the Saltpond Government hospital.

Police have commenced investigation into the circumstances leading to the accident.