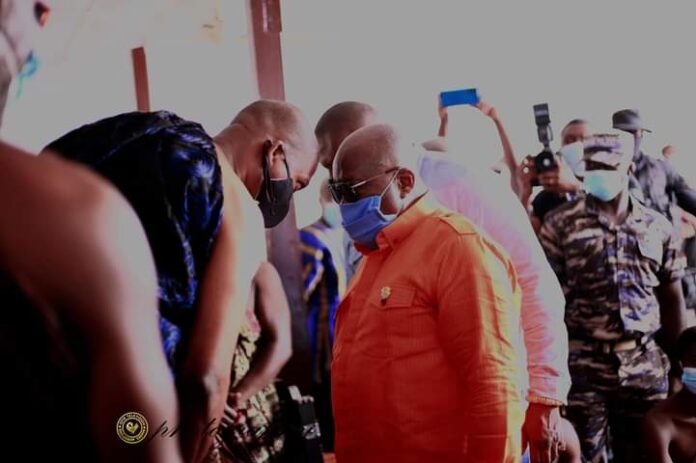 President Akufo-Addo has stated that he will do everything possible to ensure that the chieftaincy dispute in Okuapeman is resolved to pave way for the gazetting of Okuapehene Oseadeeyo Kwasi Akuffo II.

President Akufo-Addo said, Akropong being his hometown, he owes it a duty to bring finality to the chieftaincy dispute in Okuapeman.

He was enstooled Okuapehene on May 3,2020. However, the Paramount Queenmother Nana Afua Nketiaa Obuo II and a faction in Sakyiabea Royal family are still litigating noting laid down Traditional processes were not duly followed hence the installation in their view is null and void. They are battling him at the law court andthe  House of Chiefs.

But according to President Akufo-Addo, the dispute will be resolved just as he has achieved in Yendi and Ga.

“Just last three days if you read the newspapers, watch television and listened to radio stations, you will notice that the Ga Mantse who was embroid in litigation for many years in court, Traditional house of chiefs and Supreme Court, has finally been gazetted. He’s taken his position at the Regional Council. This is the second major chieftaincy dispute that under my leadership has been resolved. The first one of course is what happened in Yendi which led to the enstoolment of Yaa Naa who is in state helping to spur up development in the area.”The President said.

He continued “so if I am not able to do same in my hometown then it means I have not been fair to you. So my main objective now is that, I will do whatever possible to ensure there is peace and tranquility in Okuapem for everyone to accept that Okuapehene is Oseadeeyo Kwasi Akuffo,that, all Divisional chiefs in Okuapeman will pay homage to you. I am hopeful that by the grace of God it shall come to pass”.

President Akufo Addo said this Wednesday October 6,2021 when he paid courtesy call on Okuapehene at the palace in Akropong as part of the second day of his three-day tour of the Eastern Region.

Okuapehene Oseadeeyo Kwasi Akuffo II in his brief speech commended President Akufo-Addo for his numerous development projects in the Akuapem area and other parts of the country.

He urged the president to continue the trend and do more for the betterment of the country.