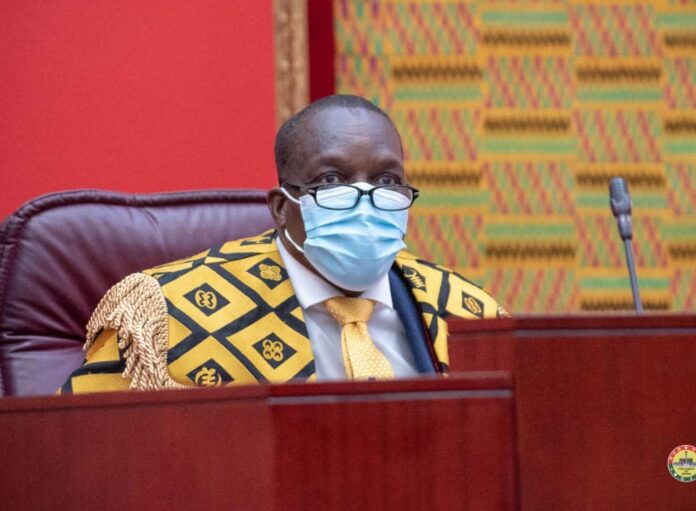 A pro-NPP group, Fixing The Country Movement has called for investigations into the actions of the Speaker of Parliament Alban Bagbin following the rejection of the 2022 budget by Parliament last Friday.

According to the group, “Bagbin has belligerently defied the law and thrust aside the Constitution in an attempt to assault the Akufo-Addo presidency in a fashion akin to coup d’etat. The Speaker violated Article 104 of the constitution and Order 109 of the standing orders of Parliament.

“Indeed his troubling departure from conventions and laid down due process must be a matter of concen to us all,” the group said in a statement.

The 2022 budget was rejected by a one-sided Parliament after the Majority walked out of the House.

Below details of the statement by the group

Fixing The Country Movement Calls for Investigations and possible removal of Bagbin from office.

“When institutions of democracy go too far, it actually weakens our respect for judicial institutions.”

The quote above is attributed to him in reaction to a stalemate in Congress over the 1999 budget surplus.

Several decades after Gingrich’s famous intervention in Congress, Rt. Honourable Speaker of Ghana’s Parliament, Alban Bagbin failed to lead in a manner that epitomizes integrity and respect for the institutions of democracy.

Fixing the country Movement deems Bagbin’s extraordinary claim of parliamentary privilege as a speaker, to covertly attempt to engage in constitutional coup d’etat with connivance of the minority caucus during the passage of the 2022 Budget statement, not only as a disagree to the institution of parliament but sees it as an affront to due process.

Lets face it, Bagbin has belligerently defied the law and thrust aside the Constitution in an attempt to assault the Akufo-Addo presidency in a fashion akin to coup d’etat.

The Speaker violated Article 104 of the constitution and Order 109 of the standing orders of Parliament.

Indeed his troubling departure from conventions and laid down due process must be a matter of concern to us all.

Parliament House was designed as a classical House consecrated to democracy, which is why the speaker’s unprecedented assault on our democracy ought to be investigated and if possible remove from office.

Most legislatures all over the world have a way of dealing with the Bagbin- like situation that we find ourselves in. They have established procedures to investigate and, if necessary, remove undesired speakers from office. In 1695, the British House of Commons empaneled a committee to investigate Speaker Sir John Trevor; in 1989 the US House of Representatives empaneled the Ethics Committee to investigate Speaker Jim Wright. The same thing occurred in the Parliament of Trinidad and Tobago in 1995. Speaker Seapaul was eventually removed from office.

Ghana needs to follow suits and deal with Bagbin ruthlessly. Every true defender of democracy ought to stand up and be counted. The horrific assault on our democracy by the speaker must not go unchallenged.

We must collectively show to the country and to the world that we would not be diverted from our duty to invalidate the speaker’s actions.

And despite the desecration of our democracy by the speaker, Parliament must uphold its responsibility to the Constitution and to the Ghanaian people.