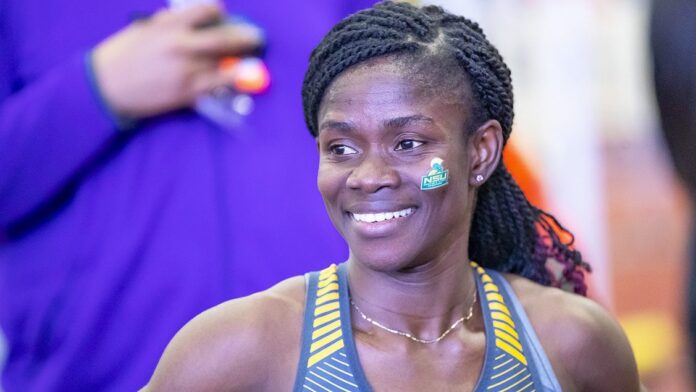 Ghana’s Sprinter, Martha Bissah’s guardian, Kwaku Nimako has shot fire at his athlete, Martha Bissah as a traitor by signing an apology letter to the Ghana Athletics Association.

In 2016, the 28-year-old Olympic youth medalist accused the boss of the Ghana Athletics Association during that period, Francis Dodoo, of exhortion over a supposed scholarship to enable her study in the United States.

As a result, GAA banned Martha Bissah indefinitely for her indiscipline and bringing the name of the association into disrepute.

However, Martha Bissah together with his guardian and other stakeholders refused to apologise stipulating that whatever the lady spewed was nothing apart from the truth.

Earlier this week, Bissah apologised to the association and copied the National Sports Authority to that effect for her indiscipline after six years of being suspended.

But her guardian, Kwaku Nimako asserts that Martha double crossed them to apologise to the association and her actions sums up to her ungratefulness.

“I believe Martha has betrayed all of us simply because she has showed gross disrespect towards us. After meeting with the NSA boss, Martha used insulting words against me which she has never done. Martha said she didn’t know I was I wicked man. For helping her all this while?, he told Bengazy on Sports Today on Starr fm.

According to him, he feels Martha was compelled into writing the apology letter.

” We don’t know what the NSA boss has promised Martha Bissa, there is something wrong somewhere, the girl did not act by her self.

Martha Bissa is the only female Ghanaian athlete to have won a gold medal for the 800-meter race at the 2014 Summer Youth Olympics.