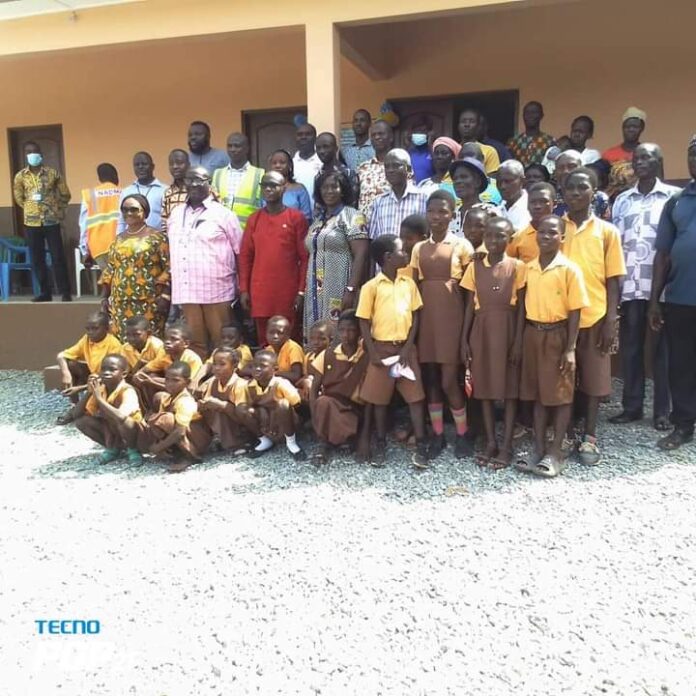 The West Akim Municipal Assembly in the Eastern Region has handed over a 3-unit classroom block, a library, office, store, a 6-unit KVIP toilet facility, and a 2-unit urinal block to Onyinafunso community after Starr News reported on the perilous nature of the previous school block.

The edifice was funded through the District Assembly Common Fund (DACF), and the Responsive Factor Grant (RFG) was urgently constructed within three months instead of the construction period of six months given the Contractor, Sterling FB Construction Limited .

In a brief handing over ceremony the Municipal Chief Executive, Seth Oduro Boadu, reiterated the commitment of President Akufo-Addo led government to equitable the distribution of educational infrastructure and logistics to improve quality education for all children.

He charged the management of Onyinafunso M/A Basic School and the Community to own the edifice and maintain same for sustainable use.

The MCE said the rest of the three classroom block will be included in the next budget of the assembly for its to be added. 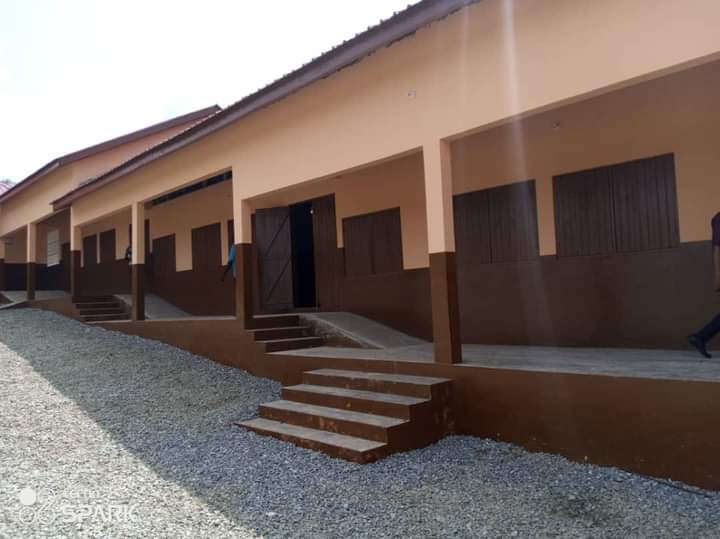 The member of Parliament for the area Charles Acheampong assured that the Community will soon be connected to the national grid to enable them have access to electricity .

The Municipal Director of Education, Mrs. Eunice Amfo-Akonnor is hopeful the new facility will improved performance of pupils in the area.

Starr News Eastern Regional Correspondent Kojo Ansah visited the school and published on June 8, 2021, that, parents in Onyinafunso and other surrounding communities were withdrawing their children from the Onyinafunso M/A Basic School due to the perilous condition of the school’s buildings.

The school, constructed in 1962 with mud building material by the community had deteriorated and near collapsing.

The roofs were tattered hence cademic work disrupted whenever it rained.

Although classroom start from kindergarten to class six, the deplorable classrooms were only three, therefore, classes are merged while those in the lower primary study in an Apostolic Church building.

One of the pupils lamented that “we stop learning whenever it rains, when the sun is high too we struggle because the roofs have been ripped off. Our books are soaked when it rains unexpectedly, we ran to the church to seek shelter. We return to class after the rains. it has rained today, look at my uniform. It is drenched we are lucky today is Friday. So we are pleading to the President, we respect him soo much so he should come to our aid.”

The Headteacher of the school Dzamasi Thomas said teaching and learning were always disrupted .

“Whenever it rains, we evacuate the kids to a church building here. We have to move all the kids to that place, which means you cannot continue teaching. It has been very tough for us. This rainy season if the situation remains the same then academic work will come to a halt. For we teachers we are doing our best, we encourage each other not to seek reposting that the situation will be better. But when we ask the parents to allow their children to attend school they berate us that we should bring our children to sit in the deathtrap of a school,” the Headteacher said.

He expressed fears the school may collapse if the situation remained unchanged considering the rate at which parents were withdrawing their children.

Starr FM is excited that, pupils in these rural Communities would now have access to a befiting classroom and library .