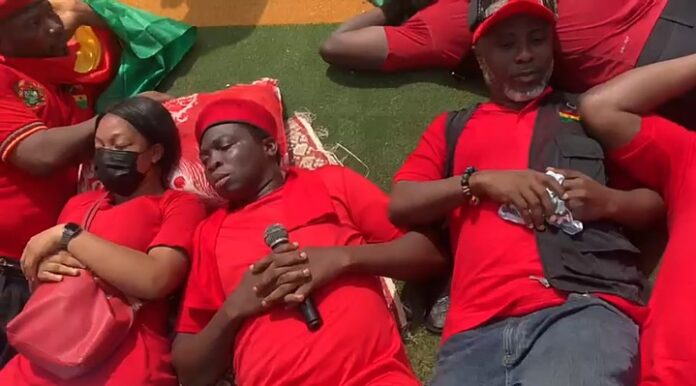 The Ghana Police Service (GPS) has said the Justice for Ghana protestors will not be allowed to picket in Parliament.

Currently, there is heavy security presence at the main entrance to Parliament House preventing the Protestors who are aiming at picketing in the premises.

According to the Police, they have secured an injunction from the High Court to stop the picketing in Parliament.

The Accra Regional Police Commander, DCOP Iddi Lansah Seidu, indicated that the move for the injunction is to stop the protestors from going on with their aim at the premises of the legislative chamber.

The main aim for the demonstration is for the Electronic Transaction Levy (E-Levy) to be withdrawn from the 2022 budget.

Meanwhile, the protestors have resort to naps after they were denied entry into premises of Parliament.

The Pressure Group converged at the Efua Sutherland Children’s Park where they started with their protest against the 2022 budget.

“As you can see, I have my mat and pillow as I have told you, I am coming to sleep.

“We will enter Parliament. The police restraining order is a sham because we and the police agreed that we will start at Efua Sutherland park, and they are here, so why is the restraining order referencing Nkrumah Circle. Either the Police misled the court or they had forgotten that we had further agreed that we will start from here,” the leader for the Group, Bernard Mornad refuted.